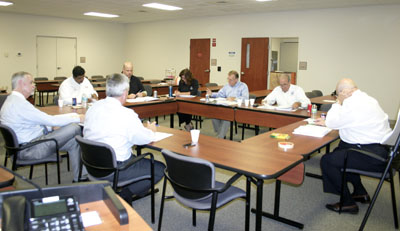 The Royal Palm Beach Village Council met for a strategic planning workshop last week to establish goals for the village in order to adapt to new economic conditions and a shifting village profile.

The workshop, held Thursday, Nov. 15, was led by consultant Lyle Sumek and attended by all council members as well as Village Attorney Brad Biggs and Village Manager Ray Liggins.

Liggins said he believes the results will set realistic standards for the village’s future.

“The purpose is to create a long-term vision that will be part of the decisions we make when it comes to the budget from now through the next 15 years,” he said. “The process, when implemented, will turn policy decisions into specific actions that the council can keep track of and up to date on.”

The goal is to create a “living document” — not just something that will sit on a shelf, he said. The process is similar to the periodic updates to the comprehensive plan required by the state for all municipalities every seven years, Liggins added.

The workshop began with staff and council members reflecting on the successes of the past year, challenges of the future, projects that are in progress and targets for short-term issues over the next few years. Then the council began to look ahead for the next 15 years to envision how they saw the village at that time.

“They took all those ideas, put them on the table and, through a consensus process, determined what was important to them,” Liggins said.

He hopes that strategic planning will be included as an annual process. “I absolutely believe it should be a fundamental part of our yearly budget process,” Liggins said. “It really does have that ability to connect how we spend our money to the vision.”

Liggins said the time is ripe to conduct planning sessions because the economy and village’s profile have changed so much. “We went through a very specific vision/mission that we started 20 years ago,” he said.

Liggins recalled conversations with former Mayor David Lodwick and current Mayor Matty Mattioli, who has been on the council nearly 20 years, as well as former Councilman David Swift and former Mayor Tony Masilotti, when the village went through a population shift from primarily seniors to more families.

“It was starting to be recognized as more of a place to have a family,” Liggins said, explaining that all four of those officials represented a younger generation. “Matty was even a part of that. Even though he was part of the senior community there, he was a young senior, and he embraced the new mission that they came up with for a family-oriented community. From that, a whole lot of decisions were made.”

The decision to hire professional management that could follow through on that vision came in the form of the late Village Manager David Farber, Liggins said. “A lot of changes were made when he got here,” he said.

Ordinances were approved to require that developers pay impact fees and dedicate land to public use, which helped create the extensive park system the village has now.

“Every one of our schools was due to a very aggressive council back then,” Liggins said, adding that all sit on land donated by the village. “Their vision then was of a safe, family-oriented community with a full range of municipal services at the best value, and they lived that and we still live that.”

Although the mission is still valid, the means of attaining it have changed, Liggins said. About 95 percent of the village’s land for residential use has been built out, and only about 40 percent of its non-residential land remains.

“Here we are, I think, at the end of the financial crisis that we’re in,” he said. “A lot of tough decisions were made, and we have lost a lot of revenue. I don’t see the next 10 or 15 years bringing in a whole lot of new development revenue. We need some process in place to prioritize what’s important to us because there’s just not going to be extra cash flow.”

Liggins said Sumek is compiling the results of the council’s input at the workshop and will make a report in the near future.

“From that, we’ll go back during the budget year and create a five-year plan,” he said. “That also will be put out to the public to get their input.”
ABOVE: Royal Palm Beach officials at last week’s workshop.