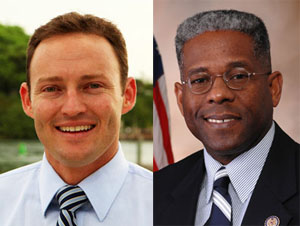 In a statement released Wednesday, West’s campaign manager Tim Edson said that he wanted to be sure all votes were fairly and accurately tallied.

“This race is far from decided and there is no rush to declare an outcome,” Edson said. “Ensuring a fair and accurate counting of all ballots is of the utmost importance.”

West has not commented publicly on the race.

As the Town-Crier went to press, attorneys for West had filed motions in Palm Beach and St. Lucie counties to impound ballots and voting equipment for a possible recount. With hearings held Thursday in Palm Beach County and Friday in St. Lucie County, a final decision may not be made until early next week.

In total, Murphy was ahead by 2,159 votes (0.66 percent). Under state law, a margin of 0.5 percent or smaller triggers an automatic recount.

Edson’s statement said that he was suspicious of a recount done on early ballots in St. Lucie County on Tuesday night.

Edson’s statement also pointed to many “irregularities” in voting in St. Lucie County.

“The St. Lucie County Supervisor of Elections Office clearly ignored proper rules and procedures, and the scene at the supervisor’s office last night could only be described as complete chaos,” he said.

Edson called for a hand recount.

“Given the hostility and demonstrated incompetence of [Walker], we believe it is critical that a full hand recount of the ballots take place in St. Lucie County,” Edson said. “We will continue to fight to ensure every vote is counted properly and fairly, and accordingly will pursue all legal means necessary.”

But Murphy and his supporters had already declared victory.

“I’m ecstatic,” Murphy told the Town-Crier Wednesday. “It has been a lot of hard work. I owe so much gratitude to so many people, especially the voters. Ultimately, they decided who they wanted to represent them in Washington. I’m honored and humbled to receive that support, and I look forward to working my tail off for everyone in this district.”

Murphy said that although he didn’t have the same notoriety going in and was outspent almost five-to-one, voters sent a strong message.

“This proves to me, and hopefully to the country, that money can’t buy elections,” he said. “That is a much more important message than anything else in my opinion.”

District 18 includes northern areas of Palm Beach County and all of Martin and St. Lucie counties. Most of The Acreage and parts of Royal Palm Beach are in the district.

In other local races:

• Democratic Congressman Ted Deutch won the newly drawn District 21 seat, taking 209,420 votes (77.7 percent), while Mike Trout took 35,902 votes (13.32 percent) and Cesar Henao took 24,192 (8.989 percent), according to unofficial results. Both Trout and Henao ran without a party affiliation. The Republican Party did not field a candidate for the seat, which includes all of Wellington.