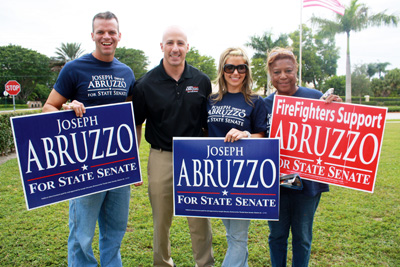 In 2012, Palm Beach County saw the return of several familiar faces to office in hard-fought contests during its August and November elections.

Residents also garnered support from the Palm Beach County Commission on concerns about keeping livestock under county codes, which were amended to be more explicit.

But controversy continued around the Office of the Inspector General, with the county continuing to be embroiled in a lawsuit and having to find other methods of funding.

Election Day in November was a winner for incumbents in local State Senate and State House races when voters chose to retain their representatives in Tallahassee.

Democratic State Rep. Joseph Abruzzo will get a title change as the first state senator from the newly redrawn District 25 after he defeated Republican challenger Melanie Peterson.

Murphy and his supporters declared victory the day after the election, although West filed lawsuits that were eventually unsuccessful.

In August, five incumbent constitutional officers in Palm Beach County were re-elected to their positions by large margins.

After 20 years on the job, Property Appraiser Gary Nikolits took 70.1 percent of the vote against attorney Robert Weinroth.

County Weighs In On Residents’ Right To Keep Livestock

In a 4-3 decision on Aug. 23, the Palm Beach County Commission approved a change to the Uniform Land Development Code that will allow livestock to be kept on property in The Acreage and Jupiter Farms.

The change would protect residents on lots smaller than 2 acres in the agricultural and exurban tiers who are guaranteed the right to keep livestock in the comprehensive plan but previously had no supporting language in the land development code.

However, the commissioners postponed adoption of other rules that would provide further regulation on items such as accessory structures, setbacks and sale of goods.

In September, the county commission gave final approval to a $3.4 billion spending plan for fiscal year 2012-13, which started Oct. 1.

The commissioners set the county’s general fund tax rate at 4.7815 mills, the same rate as last year. At that rate, the county will take in just under $600 million in ad valorem property taxes, up slightly from the previous year.

Commissioner Paulette Burdick said she was cautiously optimistic about the future revenue picture.

The decrease is depleting fire-rescue’s reserve, but the county is banking on optimism that the economy will continue to recover before the reserve is completely depleted years down the road.

Controversy continued to swirl around funding for the Office of Inspector General in 2012. According to the ordinance that created the office, it is to be funded with a .25 percent charge included in vendor contracts, but officials in many cities alleged that would be too burdensome.

In March, the county commission rejected a settlement proposal from 15 cities involved in a lawsuit challenging the method of payment for the IG’s office, saying that it offered too many exceptions for certain businesses. Wellington later pulled out of the lawsuit, reducing the number of cities in the lawsuit to 14.

The commission conducted a referendum in November 2010 asking if the municipalities should come under the jurisdiction of the inspector general, which passed with a 72 percent margin.

ABOVE: Joseph Abruzzo campaigns during his successful State Senate bid.