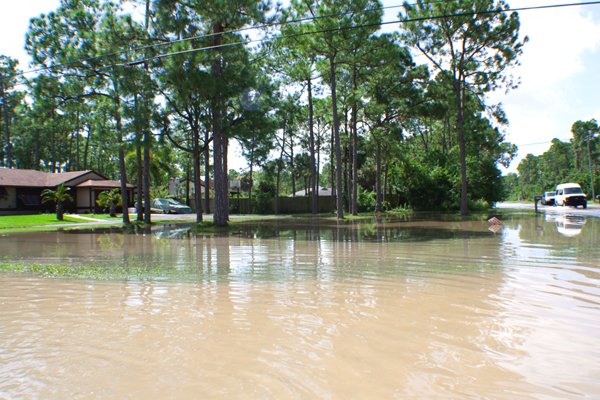 Residents of the Acreage experienced twists and turns last year, taking the good with the bad. On one hand, several long-awaited projects moved forward, but on the other, the community was set back by massive flooding.

Tropical Storm Isaac crippled the area for nearly two weeks, leaving many residents trapped in their homes by flooded roadways. The storm brought to light critical drainage issues in the area.

But projects such as the extension of State Road 7 moved ahead, with its extension to 60th Street North gaining county approval, and its ultimate connection to Northlake getting approval from the Florida Department of Transportation.

The Acreage Reels From Isaac

After Tropical Storm Isaac dumped 15 to 18 inches of rain on The Acreage in late August causing widespread flooding, local agencies started meeting to figure out how to avoid future flooding disasters.

The most recent gathering was on Dec. 19 when several agencies held a joint meeting to address how and why Tropical Storm Isaac caused widespread flooding in The Acreage and how to remedy the problems.

Key projects discussed were improving drainage capacity for The Acreage and reinforcing the dike separating the J.W. Corbett Wildlife Management Area from the northern reaches of The Acreage.

The possibility of a breach in the dike separating The Acreage and Corbett was a primary concern during the flooding, and South Florida Water Management District officials confirmed that the agency is designing a secondary isolation berm for Corbett to provide improved stability and increase its ability to serve as a water storage area without compromising the welfare of Acreage residents.

Meeting participants also discussed discharge for ITID to the south into the C-51 Basin as well as some type of agreement for discharge to the Mecca Farms property off Northlake Blvd., which one day could serve as an added water retention area. Palm Beach County is negotiating to sell the land to the SFWMD.

Election Changes Makeup Of ITID Board

Two Indian Trail Improvement District Board of Supervisors seats were up for election in 2012, and while ITID President Michelle Damone weathered a challenge from Ken Hendrick, Supervisor Carlos Enriquez was unseated by Gary Dunkley.

Dunkley took his seat on Dec. 12, changing the political makeup of the board. Supervisor Jennifer Hager was elected ITID’s new president, replacing Damone, who remains on the board but without an officer position. Supervisor Carol Jacobs was named vice president, while Dunkley was chosen as treasurer.

Indian Trail Improvement District Administrator Tanya Quickel offered her resignation at the Dec. 12 board meeting after calls from Jacobs to reorganize ITID’s leadership to bring the director of operations directly under board supervision.

Former Director of Operations Anthony Las Casas left the district in December after sharp public accusations, first that canal levels were being kept too low, then that the district had not properly handled the flooding from Tropical Storm Isaac.

Jacobs said she wanted not only to bring the director of operations and maintenance directly under the board’s supervision, but also wanted to reduce the administrator’s responsibilities, changing that position to district manager.

Jacobs made a motion to terminate Quickel effective immediately, but it died for lack of a second. Quickel, who has a contract, then requested to have her resignation negotiated with legal staff. Whether Quickel stays or goes will likely be a key story in 2013.

On Nov. 14, ITID issued a special drainage permit to Palm Beach County to connect 60th Street North to the planned extension of State Road 7. The connection will provide an additional outlet for the SR 7 extension, providing relief to residents on Orange Grove and Persimmon boulevards who have suffered the brunt of the traffic coming off the extension.

The approval, however, was without a center turn lane currently in the county’s plans after some residents complained that the ultimate purpose of the road was to give a connection to eventual development to the west. The third lane was intended to allow residents along the road to get into their homes safely, according to county staff.

The road will have connections at Mango Blvd. and 110th Avenue North, and a roundabout that will connect the road to the planned SR 7 extension and a future connection to Northlake Blvd.

SR 7 has been bid out and will be constructed up to the 60th Street roundabout from Persimmon Blvd. To the west of Royal Palm Beach Blvd., 60th Street will taper back to a dirt road with a traffic light at the intersection.

In September, the ITID board put plans for building a community center on hold after hearing a barrage of complaints from residents angry about flooding in the aftermath of Tropical Storm Isaac.

Flooding across the community kept residents of The Acreage stranded in their homes until the waters finally receded enough for streets to be passable again. Some residents said that ITID should put its community center plans on hold and take care of drainage improvements first.

In June, the ITID board approved a budget with assessments 2.5 percent lower on average than the 2012 budget.

However, the 2013 budget of $11.9 million is higher than the $11.6 million budget of the current year. That differential was achieved by tapping ITID’s reserves, according to district staff members, who pointed out that the reserves are still within 25 percent of the annual budget. Almost $1 million would be taken from the reserves, with most of it going to capital road improvements.

The overall 2013 budget marked the fifth consecutive year of decreased assessments, with an average assessment of $419 a year, compared with $526 in 2007.

In a 4-3 decision, the Palm Beach County Commission in July approved a comprehensive plan amendment that would eliminate a 65,000-square-foot single-tenant cap on the Sluggett property at the intersection of Southern Blvd. and Seminole Pratt Whitney Road.

The property had previously been approved for up to 280,000 square feet of low-density commercial property on the 64-acre tract with the 65,000-square-foot cap, but the applicant requested authorization to allow a larger store such as a Home Depot or Walmart on the property.

On March 31, the long-planned Acreage branch of the Palm Beach County Library System opened. The 30,000-square-foot library at 15801 Orange Blvd. was finally built after prolonged land-swap negotiations with the Indian Trail Improvement District.

The building has been honored with Leadership in Energy and Environmental Design (LEED) certification. The Acreage library is the first LEED-certified county building. Some of the features that qualified the branch for this designation are parking spaces for alternative-energy vehicles; hitching posts and bicycle spaces; water-efficient landscaping; plumbing systems that use less water; reduced construction waste; use of recycled materials in the construction; and use of low-emitting paint, carpeting, adhesives and composite wood.

The new facility has solar-powered chandeliers depicting oranges in the entranceway and more than 100,000 materials for checkout or reference. It has 74 word processing and Internet computers available to the public.

More than 1,000 residents attended the final Florida Department of Transportation public hearing in March on the completion of State Road 7 to Northlake Blvd., with advocates outnumbering opponents about two to one.

The connection would finish the roadway between Okeechobee Blvd. and Northlake Blvd. to meet the growing travel needs of central Palm Beach County residents.

The selected corridor would complete the connection ending at Persimmon Blvd. now, and continue north to 60th Street North, turn east along 60th Street, and head north again along the original SR 7 corridor designated by the FDOT in 1940, part of which has been built from Northlake Blvd. south to the Ibis east entrance.

The project proposes to widen SR 7 from two to four lanes from Okeechobee Blvd. to 60th Street and construct a new four-lane divided highway from 60th Street to Northlake. The estimated cost for the fully-funded project is about $70 million for construction and about $16.5 million for mitigation.