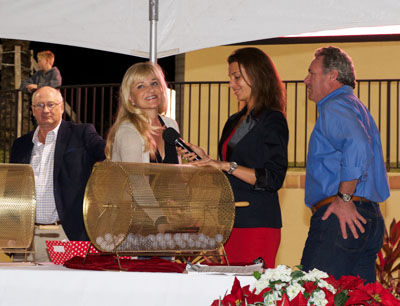 The 2013 FTI Consulting Great Charity Challenge, presented by Fidelity Investments, will take place Saturday, Jan. 26 at 6 p.m. under the lights of the International Arena at the Palm Beach International Equestrian Center in Wellington.

The GCC is an exhilarating event where amateurs are paired with world-class riders and randomly assigned with charities to compete for prize money raised by equestrian families and corporate donors.
In its first three years, the event raised more than $2.7 million for over 50 Palm Beach County charities. The goal this year is to raise $1.3 million with all the proceeds donated to 32 local charities.

Twenty-eight charities were randomly selected from a pool of applicants at the annual Wellington WinterFest, held at the PBIEC on Saturday, Dec. 1.

Two charities won pre-selection, while two more will be chosen at upcoming events — the $100,000 Trump Invitational on Jan. 6, and the day of the GCC on Jan. 26. The winning charity will be awarded $150,000 and every participating team will receive a share of the money raised.

More on the event, including sponsor and charity information, can be found at www.ftigreatcharitychallenge.com, on Facebook at FTI Consulting Great Charity Challenge and at www.equestriansport.com.