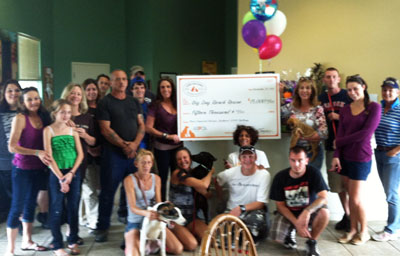 Local nonprofit Big Dog Ranch Rescue received a surprise Friday, Nov. 30 when the American Society for the Prevention of Cruelty to Animals presented the shelter with a $15,000 check.

The money was a reward for being the rescue agency with “most improved adoptions” in the entire Southeast region. Big Dog increased its number of adoptions from last year by 234 percent and placed third in its division.

This is a great achievement for the organization, and Vice President Meg Weinberger is enthusiastic about how the money will help strengthen Big Dog. “The $15,000 will go right back into the ranch,” she said. “Imagine all those animals saved and medical bills paid. It will help a lot.”

Big Dog was one of 50 shelters chosen nationwide to participate, from August to October, in the ASPCA Rachael Ray $100K Challenge. The rescue’s goal, in the span of three months, was to get 467 dogs adopted into homes.

Through intense community advocacy and involvement, Big Dog and its cadre of volunteers diligently worked to exceed that goal, and 524 dogs were adopted by the end of the challenge.

Agency officials didn’t know they had won something or even that the ASPCA was coming. They were told by e-mail to put together a volunteer rally celebrating the end of the challenge.

“They don’t tell us anything. They just show up and surprise you,” Weinberger said. “We were all getting ready for our gala that we were having on Saturday, and a woman from the ASPCA just showed up with the check.”

This was a great surprise because Big Dog officials did not expect to win anything since they were competing against many large rescues operations, such as county shelters. “We’re competing against shelters who waive their adoption fees,” Weinberger said. “That’s something that we don’t do.”

Big Dog’s leadership believes that people place more value in their animals when they pay even a nominal fee for them. “People take a little more ownership when they pay for something,” Weinberger said.

For her, the challenge was more of a learning process than anything else.

“They had all the 50 charities go to a seminar in St. Petersburg, and we had a big roundtable discussion sharing information on what we did,” Weinberger said. “Learning from all those charities was priceless. We learned how to be better at what we do.”

In order to get many of the dogs adopted, the rescue staged events throughout the community. “We were taking the dogs to people who did not even know we were in Wellington,” Weinberger said.

Big Dog partnered with local businesses such as Pet Supplies Plus and the Wellington Green Market. “At these events, we never give the animal to the people that same day,” Weinberger said. “We still do our home visits before we let people adopt a dog.”

Unique promotions were also created for the challenge period. “We had a ‘Back in Black’ promotion where we did half off black dogs for one month,” Weinberger said, explaining that Big Dog borrowed the idea from another rescue group, Best Friends Animal Society in Utah. “They openly share their marketing and promotional material with all other rescues. It’s a 40,000-acre facility, and they started out like us, doing adoption events at grocery stores.”

Now that the challenge is over, Big Dog Ranch Rescue will be focusing on its holiday adoption promotions. “Our ‘Home for the Holidays’ promotion is starting,” Weinberger said.