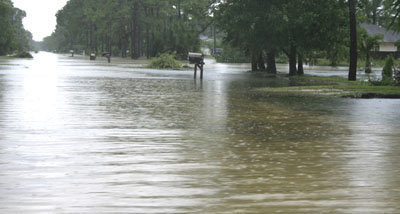 Several agencies met Wednesday to address how and why Tropical Storm Isaac caused widespread flooding in The Acreage and how to remedy the problems.

While the meeting was closed to the public, ITID Administrator Tanya Quickel and Palm Beach County Administrator Bob Weisman updated the Town-Crier afterward.

“The discussion was an update on our short-term improvements and our long-term objectives,” Quickel said.

The possibility of a breach in the dike separating The Acreage and Corbett was a primary concern during the flooding, and Quickel said that SFWMD officials confirmed that the agency is designing a secondary isolation berm for Corbett to provide improved stability and increase its ability to serve as a water storage area without compromising the welfare of Acreage residents.

“They are in the process of designing [a secondary berm], and Fish & Wildlife is fully supportive, and expressed that today,” Quickel said, adding that the SFWMD is working on financing the project. “Funding is not completely secure at this time, and as they move along, that is the next area to work out, but they are designing it so they know what kind of funding is needed.”

Regarding increased capacity, ITID has produced a draft agreement with the City of West Palm Beach to install a pump station into the L-8 tieback canal that would allow discharge to the M-1 Canal under emergency conditions.

“We hope that will be on the January agenda for Indian Trail’s board to consider,” Quickel said. “That involved both parties working on that, so that is in place.”

Meeting participants also discussed discharge to the south, into the C-51 Basin. “The next step is to ask the Indian Trail board to have a pre-application meeting with the South Florida Water Management District in anticipation of some sort of permit modification for additional discharge to the south,” Quickel said.

The Mecca Farms property off Northlake Blvd. one day could serve as an added water retention area, and Palm Beach County is negotiating to sell the land to the SFWMD. “Indian Trail has made it known that we would want to be considered for some type of additional discharge or storage as part of the Mecca property, so that will be coming forward once the sale is complete,” Quickel said.

Also on the agenda was some type of relief for the inactivated ITID area known as Sunny Urban Meadows. Property owners in that area do not hold a water discharge permit, Quickel noted.

“These people are not represented by any formal property owners’ association, so communicating with them is a bit more challenging,” she said, explaining that representatives from Commissioner Jess Santamaria’s office represented them at the meeting. “They want it to be done, but the challenge is that when the people in these areas understand the cost involved with the improvements and infrastructure, there usually is not adequate support.”

Also on the horizon is help for Deer Run and White Fences. ITID provided a plan for some improvements to the swale around the M-2 Impoundment Area to keep water from flowing into those communities during flood conditions. That plan was approved by the ITID board in October. “Those improvements are being done right now,” Quickel said.

Weisman said two follow-up meetings have been scheduled. The first one, probably in February, will be Gov. Rick Scott’s requested meeting to discuss the Corbett berm replacement. Another meeting, probably in March, will be a follow-up to the Wednesday meeting that will deal more with drainage issues.

“I thought we had a good discussion about what actions need to be taken to address the drainage issues in The Acreage,” Weisman said. “They aren’t necessarily easy things to do, but at least we know how to proceed. There are several things we need to work on; one is to improve the permitted discharge into the C-51 Basin to the south. We’re going to talk about discharge into the [L-8 rock] pits, and there’s also some options regarding West Palm Beach. We also talked further out into the future for the potential for Mecca to act as relief.”

As for Corbett, Weisman said there was general agreement that the strength of the dike, rather than the high water level, was the issue of concern.

“It’s still in the evaluation phase, but because the existing berm is somewhat on private property, what they’re thinking is that a combination of the existing berm and a better berm on the Corbett property might be the best solution,” he said.