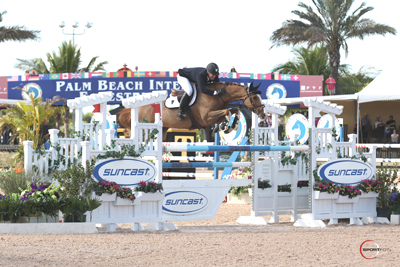 More than 3,500 fans packed the stands Jan. 12 at the Palm Beach International Equestrian Center on the opening Saturday night to watch the women beat the men for the fifth year in a row in the $55,000 Nespresso Battle of the Sexes at the FTI Consulting Winter Equestrian Festival in Wellington. It was the closest race yet in the three-phase competition between the male and female teams, but the ladies pulled out another victory in the end.

Eric Hasbrouck was the course designer in the International Arena and set the tracks for last Saturday’s classes. In the highlight $55,000 Nespresso Battle of the Sexes, the three-phase contest included speed rounds, match races and six-bar competition.

The first round of competition in the Nespresso Battle of the Sexes was the speed round, with a 6-4 win for the men. The match races followed, with the men and women competing side by side over identical courses. The women were the winners of that round with 6 points over the men’s 4, bringing the total team points to a 10-10 tie.

The final six-bar competition would be the deciding factor of the evening. Four men and four women returned from each team, with the opportunity to earn 2 points per clear round. The competition started at 1.60m (5’3”) in height and moved up to 1.80m (5’11”) through three rounds.

Following the first six-bar round, only three riders continued from each team after Maggie Bracco and Shane Sweetnam each had rails. In round two, Charlie Jayne, Laura Kraut and Daniel Bluman all had rails. Nick Skelton was the only member of the men’s team to advance to the third round, competing against Candice King and Georgina Bloomberg. The six jumps were taken down to four with the larger height, and with the men on 18 points and the women on 20, all three riders jumped clear. The final tally was 24-20, a victory for the women.

Bloomberg, captain of the winning team, was thrilled to be a part of the women’s fifth consecutive victory in the event. She was last to jump in the final round aboard her horse Highrise and gave the women the solid 4-point lead.

“Everyone was amazing,” Bloomberg said of her teammates. “We really form a team because we all work together every day. We know each other so well. It is nice to do a team competition and not be riding against each other and to really be rooting for each other.”

In addition to the winning prize money, a few special awards were presented last Saturday night. Darragh Kenny won a gift certificate from the Brazilian Court Hotel & Beach Club for the overall best time in both the speed and match race rounds aboard his mount Vanotrouska. This was Kenny’s first time competing in the Battle of the Sexes.

A $1,000 prize was also to be awarded to the rider with the most clear rounds in the six-bar competition. When Skelton, Bloomberg and King all cleared the final round and decided not to continue any further, the money was split among all three riders.

The $25,000 Suncast Championship Jumper Classic was held in the International Arena last Saturday afternoon with a win for McLain Ward riding Ilan Ferder and Missy Clark’s Zhum CW. In a class of 18 entries, nine jumped the first round course without fault to jump off, and Ward and Zhum CW completed the fastest double clear round in 38.663 seconds.

McLain Ward first rode Zhum CW in November and immediately won the $10,000 Holiday & Horses Welcome Stake one day later in the pair’s debut in the show ring. Ward has now shown the nine-year-old KWPN gelding a few more times and is getting a better feel for the ride.

Parkland and Lillie Keenan received championship honors in the Small Junior 16-17 Hunters during the first weekend of WEF competition. The 8-year-old Dutch Warmblood gelding, owned by Jennifer Gates and trained by Gerardo Escalara, placed first and second over fences on day one of competition. Keenan rode Parkland to first and second over fences during day two, tying with Lyle and Taylor Sutton going into the under saddle. Parkland and Keenan placed second under saddle, earning them the division championship.

Lyle and Sutton placed fourth under saddle to pick up the reserve championship prize for the division. The pair was edged out by Parkland and Keenan after strong jumping performances earned them first and second place ribbons during day two. The pair was also first and second in day one’s over fences classes, jockeying for first place with Keenan and her mount.

Owner/rider championship honors were also awarded at the end of the division. The award is designed to promote junior riders owning and riding their own horses. Genuine and Cloe Hymowitz took home the prize after solid jumping rounds and finishing third under saddle.

The pair kicked off their show career this month in Wellington after starting the winter at home in New York. They’re yet another freshly matched team off to a great start at WEF. Parkland was Small Junior Hunter 16-17 champion at the A-T Children’s Benefit Horse Show Jan. 3-6 before securing the title again during WEF’s opening week.

Parkland and Keenan will return to the hunter ring during week two, hoping to keep their championship momentum rolling in the Small Junior Hunters 16-17.