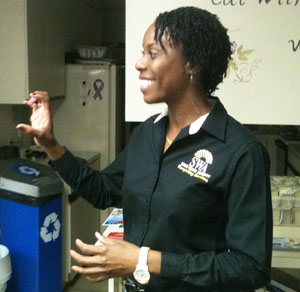 The SWA, a division of Palm Beach County’s government, hires private haulers for garbage removal from homes and businesses in unincorporated areas. “Private haulers pick up the garbage and bring it to one of our transfer stations,” she explained.

The transfer station most used by local haulers is the West Central Transfer Station at 9743 Process Way in Royal Palm Beach. The trash is then transferred to SWA tractor-trailers, which hold about five dump-truck loads of garbage.

“That helps out with wear and tear on the roads, less greenhouse emissions and gets the garbage moved quicker than one garbage truck going back and forth,” Blackman said. “All the garbage heads to 45th Street and Jog Road in West Palm Beach. That’s the only place the garbage is disposed of in Palm Beach County.”

Each person generates an average of 6 pounds of refuse per day. “We have about 1.3 million people living in Palm Beach County, so the Solid Waste Authority gets about 7.8 million pounds of garbage every single day,” Blackman said. “That’s a lot of garbage, so we burn the garbage and we bury it.”

The trash goes through several steps before it’s burned or buried, beginning with the removal of propane tanks. “One of the first things we look for is propane tanks,” she said. “Propane tanks are considered hazardous waste and should never be thrown away with regular garbage. That’s one thing the spotter is going to be looking for.”

The garbage is then chopped up and placed on a conveyor belt where a huge magnet pulls all iron and steel materials out, such as cans. It then goes through an electric current separator that pulls out aluminum.

Vegetative matter is ground up, mulched and composted, and is available to residents at the main SWA facility. “We give that away free to Palm Beach County residents,” Blackman said. “You can take as much or as little as you like; you just have to get it yourself.”

Right now, only about 50 percent of the garbage received is incinerated because that is all the center can process. “Our facility is bursting at the seams,” Blackman said. “It cannot burn all the garbage we currently receive. That is why it is important to reduce your waste and recycle your waste. Unfortunately, we do have to landfill about 50 percent. After the burning facility is full, the garbage is directed across the street to the landfill.”

The SWA runs a Class 1 landfill where household garbage is dumped and a Class 3 landfill for construction and demolition debris. Both are lined to prevent seepage into groundwater, Blackman said, pointing out that the SWA works closely with the Palm Beach County Sheriff’s Office to apprehend illegal dumpers.

“Some companies want to avoid the disposal cost and will use wooded, desolate areas,” she said. “It’s not right, it’s illegal and they will be fined.”

Garbage dumped at the landfill will be there a long time to allow it to break down, she said. Hills around the waste disposal site that are topped with grass means they have been capped and will not be used again for waste disposal. The tops of the capped-off areas are about 165 feet above sea level. “It’s not going to flatten overnight; it’s not going to flatten in 20 years,” she said. “We don’t want these landfills popping up all over our beautiful county.”

The good news is that recycling does work, Blackman said. “I’ve been at the Solid Waste Authority for over 15 years,” she said. “Every few years they kept projecting that the landfill would have to close and we’d have to find another place for it.”

Recycling has forestalled the expense and eyesore of another landfill site so far. “I encourage you to reduce your waste, reuse your waste and recycle as much as possible,” she stressed.

Businesses that recycle can save money, and the SWA has consultants who can help. “They actually go through the dumpster and see what’s in there,” she said.

Items that can be recycled include envelopes with clear mailing windows, cereal boxes and most types of dry-food boxes. “Any type of junk mail, magazines, catalogs, all that stuff, can go right into the yellow bin,” Blackman said.

Caps can be replaced on plastic and glass bottles for recycling after a quick rinse, she said.

Hazardous wastes, such as used oil, filters, antifreeze, pesticides, gas cylinders, fuel and gas, flares, mercury and fluorescent lights, electronics, paint, used cooking oil, and household and auto batteries can be dropped off at any of a half-dozen transfer stations, including the West Central Transfer Station.

Old paint is sent to a facility in Tampa where it is recycled, bought back by the SWA and given away for various beautification projects. Alkaline batteries can be disposed of in the garbage, Blackman said.

The SWA also partners with the PSBO for Operation Pill Drop. “Never flush any type of old medication down the toilet or drain,” she said. “It does contaminate our water. We have drop-off sites at all our sheriff locations.”

The SWA has a system of nature trails in a 300-acre conservation area set aside at its main collection facility at Jog Road in West Palm Beach. “It’s a beautiful trail, and I encourage you to take advantage of that,” Blackman said.

The SWA recently started construction of a new mass burn facility that should be operational in 2015.

“We’re really excited because at that point we should be able to burn almost 100 percent of the garbage, turning it into electricity,” Blackman said. “Currently, we make enough electricity to power about 37,000 homes. This will add an additional 56,000.”