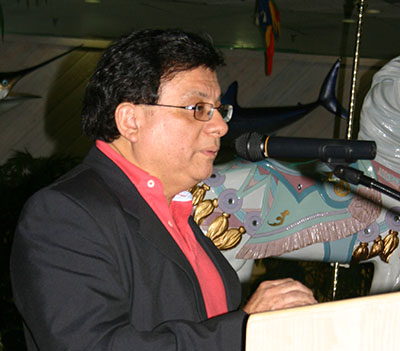 Dr. Armando Marull spoke about living a longer life and forestalling the effects of Alzheimer’s disease at the monthly meeting sponsored by County Commissioner Jess Santamaria at the original Wellington Mall on March 20.

Marull, a board-certified internist who has practiced in Wellington for three decades, said Alzheimer’s will be a major issue for healthcare in the United States over the next 50 years.

About 5 million people are afflicted with Alzheimer’s, and about $250 billion a year is spent for their care, he said. For each Alzheimer’s patient, about 15 people are involved in their care, including nurses, physical therapists, doctors and social workers.

“Eighty percent of the people living in nursing homes are living with Alzheimer’s someway or somehow, because Alzheimer’s is in different stages,” he said, explaining that some Alzheimer’s patients can still function to some extent, while others cannot.

Alzheimer’s is a degeneration of the cognitive function that allows people to socialize, he said. The foremost symptom of Alzheimer’s is forgetfulness, which gets progressively worse until the person can no longer function. “You cannot think; you cannot remember anything,” Marull said.

Alzheimer’s can be slowed down by taking action years before by controlling cholesterol and blood pressure, which has been shown to slow the onset of the disease. A low-cholesterol diet can help. “A third way is to be social with other people like you are being here,” he said, explaining that many people work and go home without taking time for social activities. “This organization is getting you with other people. You all have some kind of life.”

Exercise is also important. “People over 65 are supposed to do exercise, socialize and eat healthy food,” Marull said, adding that vitamins E and C and antioxidants also help stave off Alzheimer’s.

About 30 percent to 40 percent of people 65 or older suffer from depression and anxiety to the point that they cannot work anymore, and one way to avert depression is to be around other people, he said.

People ages 65-plus should maintain generally the same body weight as when they were younger through diet, exercise and consuming the right kind of food. “Red wine is good; also red food such as cherries and strawberries,” he said. “That’s very good for hypertension.”

He encouraged people to visit www.alz.org to learn more about healthy diet and other subjects related to Alzheimer’s.

Remaining active is central to remaining healthy and stalling a number of diseases, including Alzheimer’s. “One of the things for Alzheimer’s is osteoporosis for the ladies and arthritis for the men,” he said. “People need to remain active up to 100 years old.”

Keeping active includes keeping the brain active by engaging in social activities, reading, taking classes and being around other people. “Keep active, keep using your brain,” Marull said. “Engage in some sort of volunteer program. Retiring doesn’t mean you do nothing, right?”

Diabetes is another debilitating disease of huge proportions, with 26 million people suffering from diabetes and 40 million with pre-diabetes. Obesity is a primary cause of Type 2 diabetes, Marull said. Complications of diabetes include blindness and reduced circulation in the legs that can lead to amputation.

Type 2 diabetes is more common in people older than 65, and tends to be aggravated by hypertension, he said. Hypertension tends to be heightened by people’s tendency to work too hard and put less emphasis on physical exercise and leisure time. “Your body is supposed to have a time to rest and give it some type of less stress to your body,” Marull said.

Progress has been made at treating diabetes, but people should take preventative measures, including exercise and a low-calorie diet with appropriate foods, and teaching their children appropriate diets and eating habits so they grow up with proper body weight and nutrition, he said. These steps are also effective in slowing the onset of Alzheimer’s.

“You can be productive until you are 80 or 85 by avoiding too much stress,” he said.

This involves a loving support group of family and friends, he said, explaining that many nursing homes do not place enough emphasis on cognitive function for their residents, which allows Alzheimer’s symptoms to advance more quickly.

“We have to be able to function in a better society that we are able to help each other,” he said. “We have to care about each other.”

Alzheimer’s is somewhat self-inflicted, he concluded, explaining that people who do not exercise and maintain an appropriate diet are vulnerable. “If you don’t exercise and you don’t maintain necessary blood pressure and cholesterol, then it’s coming to you,” he said.
ABOVE: Dr. Armando Marull speaks at last week’s meeting.