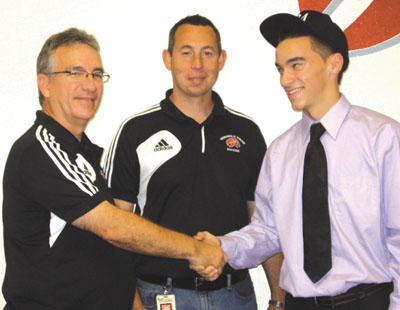 Seminole Ridge High School senior Jared Skinner has signed an athletic letter of intent and will play soccer for Palm Beach Atlantic University, which fields one of the nation’s top collegiate teams.

“After 14 years of hard work and dedication, my dreams have come true,” Skinner said. “And thanks to my family, friends and coaches. Without them it wouldn’t have been possible.”

“Our students did a fantastic job,” coach Triciana Grey said.

ABOVE: Jared Skinner is congratulated by his father Tim and SRHS boys soccer coach Earle Wright.