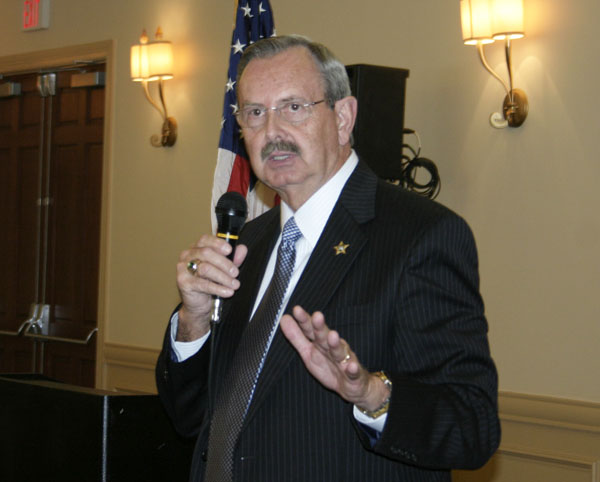 Palm Beach County Sheriff Ric Bradshaw is working to establish a special “violence prevention team” to intervene before people with mental-health issues can do harm to others.

Bradshaw was the featured speaker at the Central Palm Beach County Chamber of Commerce luncheon Monday at the Binks Forest Country Club.

“The biggest issue other than immigration right now in the country is gun control and what’s going on with violence across the nation,” he said. “I try to go in the direction that I think is the best direction for the community. The reality of it is, you’re not going to see gun control pass up in Washington.”

Bradshaw said that the best people can hope for is to get the gun-show loophole closed and background checks a little more thorough. “Even if they did pass some wide, sweeping gun control laws, that’s not going to stop what’s happening,” he said. “Look at all the laws you have on the books now… and people go and do it anyhow.”

Bradshaw recalled that a man who shot four firemen recently in New York was a convicted felon. “He couldn’t go get a gun. He got his next-door neighbor. They went down to the gun store, and he said, ‘I’d like that one.’ She went back the next day and bought him a gift. It happens all the time. It happens at the gun shows all the time. How do you think the gangs get their guns? There’s 270 million guns circulating in the United States — and 500,000 were stolen last year.”

A man who killed a sheriff’s deputy in St. Lucie County last month had bought all his guns on the street, Bradshaw said.

“Whether it’s a gun, a knife, a rock, a car, a baseball bat — whatever it is somebody uses to kill somebody else — that’s the instrumentality of the crime,” he said. “It’s the person operating it that’s the issue, and that’s the direction that I’m heading. We need to identify the people in our society who have the propensity to go do violent things, and we can do that.”

The sheriff pointed out that it’s done by Crime Watch and by the nationwide Department of Homeland Security’s “See Something, Say Something” program. “That’s how they stopped that car from blowing up at Times Square when the guy parked it and walked off. Somebody called and said, ‘Hey, that ain’t right.’ Sure enough, it wasn’t.”

The FBI recently did a study of 156 shootings in which three or more people were shot and found similarities in the incidents, Bradshaw said. “One of them is that the perpetrator at some point in time indicated to somebody through some method that something was about to happen,” he said. “How many times do we see it? Somebody says, ‘I knew that was going to happen.’ Oh, really? If you knew that was a problem, why didn’t you call us and tell us?”

The mother of the Newtown, Conn., killer told her neighbor the week before the shootings that her son was becoming more reclusive and depressed, and she was thinking of having him institutionalized, yet she still kept guns in her house, Bradshaw said. “The neighbor didn’t call the sheriff to at least take the guns out,” he said.

The perpetrators go through phases, he continued. “The first phase is a fantasy phase, then there’s a planning phase, and then they go gather whatever they need — guns, explosives — and then they go do it,” Bradshaw explained. “They’re indicating to people out there through some method — by actions, by word of mouth, social media.”

Bradshaw said there is a wide range of mental illnesses that can lead to violent acts if left untreated. “There’s 3,000 people in my jail every day,” he said. “They’re all there because they have issues. I’m the biggest mental healthcare provider in this county. I have 94 kids up there in the mental health ward. On a weekly basis, I have to treat, counsel and medicate 400 who are in there because the mental health system in this county and across the nation has not been funded properly. There’s not enough staff, and there’s not enough facilities.”

During the first few days after the Newtown massacre, Bradshaw said he listened to the news and people talking about gun control. “I realized that’s not the right direction,” he said. “That’s not what it’s about.”

Bradshaw wants to start what he calls a “violence prevention unit” available 24 hours a day.

“Each team will have a deputy and two mental health professionals,” he said. “We’re going to start a hotline similar to Crime Stoppers, where people can pick up the phone and call anonymously and say, ‘Listen, the guy down the street just got fired last week. I heard him talking the other day about how he hates his boss, he hates the people he works with and, guess what? I know he just got a gun from a gun show. I think you ought to know about that.’”

The team would then go the man’s house and interview him and assess whether he is potentially violent. “Two quick things happen here,” Bradshaw said. “One, now he knows we know about him. If he was thinking about something, that may change his mind. The second good thing that happens is we can look at him and say, ‘You know what? I think you’re a danger to yourself, and you’re going to mental health.’ If there are firearms in there, we’re going to take them for safekeeping until this is resolved. That’s prevention intervention. You can’t arrest your way out of this. There has to be a prevention intervention method.”

As an example, Bradshaw cited a case about a month ago in which a young Palm Beach County man stabbed his mother to death. His father had called the PBSO because he thought something bad was going to happen, but the young man was smart enough to say the right things, and deputies did not use the Baker Act to commit him to an institution. With a violence prevention team, the outcome might have been different, Bradshaw said.

Bradshaw recently pitched his plan to the Criminal Justice Subcommittee on Appropriations in Tallahassee for initial financing.

“It’s not cheap — it’s about $3.5 million,” he said. “I’m going to try to get them to plant the seed to start it, and I’ll figure out a way to keep it going somehow. If that doesn’t work, my next stop will be up in Washington. If that doesn’t work, I’ll try the Palm Beach County Commission, but I fight with them just to get what I already have.”
ABOVE: Sheriff Ric Bradshaw at Monday’s chamber luncheon.