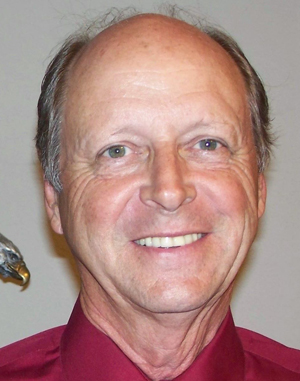 Rockett faces challenger Todd McLendon on Tuesday, March 12 in the race for Seat 2 on the council.

Rockett, 66, is an upstate New York native who has more than 40 years’ experience in accounting and financial planning. He has a bachelor’s degree in accounting from Pace University.

He and his wife, Nancy, moved to South Florida in 1980, living in several different Palm Beach County communities before eventually settling in Loxahatchee Groves to work at his son’s nursery. He has served on many homeowners’ association boards, using his financial expertise to help the organizations.

“I always have focused on finance and making good financial decisions,” Rockett said.

He began his service to Loxahatchee Groves as vice chair of the town’s Finance Advisory & Audit Committee and helped develop the town’s land use and environmental codes.

In 2010, Rockett ran unopposed for Seat 2 on the council. He said he is qualified to continue serving because he will work to save residents’ tax dollars while protecting the rural lifestyle of Loxahatchee Groves.

“I’m very frugal when it comes to someone else’s money,” he said. “If we have a surplus, I think it’s our duty to give it back.”

As an example, Rockett pointed to the money that was returned to residents when the town saw its cost for garbage pickup services decrease.

Among his top accomplishments, Rockett said he is proud that the town has been able to hold taxes low. He is also proud of the open graded emulsified mix (OGEM) road-paving projects the council supported.

“The cost per acre varied depending on where you lived,” he said. “What I convinced the council to do was… balance the cost for anyone who wanted an OGEM road. It made it equal for all residents.”

When first elected, Rockett was involved in settling the disagreements with Callery-Judge Grove, which opposed the town’s comprehensive plan but later dropped its lawsuit. “That was really the beginning of when the town could move forward,” he said.

Central to his campaign is Palm Beach State College’s new campus on Southern Blvd. Rockett has been a proponent of the plan, while his opponent has strongly disagreed.

“I paid my own way through college,” Rockett said. “That’s one reason the issue is so personal to me. This will give anyone’s children the opportunity to start college at a lesser cost. There are nothing but good things that will come as a result of the college.”

Rockett said that the campus has been carefully designed to minimize its impact on residents. Its classes are also designed with the town in mind, including an equestrian-oriented program.

“It’s an opportunity that will benefit the community and create jobs,” he said. “The college is a resident. They’re not going to come in, make a bunch of money and leave. It’s going to be a 50-year process for them to develop the school. It will bring a sense of pride to our town.”

Rockett criticized the petition that has been submitted calling for a referendum on the issue.

“It has been done contrary to statute,” he said. “They have not provided all of the information so that people can make an informed decision.”

Rockett said that there had been opportunities for residents to step forward and comment on the issue, but that going back on the deal with the college could cost the town millions of dollars.

“Their opposition is late coming, and reversing approval of the college site would be extremely damaging to the town and its residents,” he said. “This process started in November 2011. I can’t count how many opportunities there were for public input due to all the changes we had to make.”

Once the town passed an ordinance to allow the college, Rockett said that residents had 30 days to make a formal objection.

Another divisive issue facing the town is the future of Okeechobee Blvd. as it runs through Loxahatchee Groves — both in the road’s makeup and how the land around it will look.

“I want to see a two-lane road with turn lanes at all major intersections,” Rockett said. “One of the proposals I’m in favor of is a tree-lined roadway where you wouldn’t see much but trees and maybe an [equestrian] trail system.”

He said he thought the town had to be careful when considering commercial development along the road. “In the heart of your town, you have to be very careful with what you put along your main road,” Rockett said.

Instead, he’d like to see development focused along Southern Blvd. “It’s a matter of what form [the development] takes,” he said. “It needs to meet our requirements. It needs to be something the town needs and something residents will benefit from.”

As for the relationship between the town council and the Loxahatchee Groves Water Control District, Rockett said he felt it should be a partnership.

“I think it’s a mutually beneficial relationship,” he said. “It’s a partnership, not a domination where we are in control.”

But the council has considered taking over the responsibility of maintaining roads, leaving the LGWCD to focus on canals.

“Our goal is to strip the road maintenance responsibility and leave them with water,” he said. “That’s what they should be doing best anyway. It’s not something [the district] needs to do. They should focus on water, and we can focus on roads.”

Rockett said he supports leaving the district as an independent entity rather than assimilating it under town control.

“One of the first things they did was to apply for a grant for an equestrian trail — something we weren’t able to get anyone to handle in the past,” he said. “They have a lot of things on their plate, but I think they’ve brought a lot to this town.”

He said that he was happy with the current budget but thinks the council should scale back the $1.5 million allocated for a town hall.

“I don’t think it’s time to make that kind of investment,” he said, but he noted that the town’s government is in need of new office space. “What we have now isn’t conducive for an office environment.”

Though some have accused him of being aligned with the interests of large nurseries in the area, Rockett said he advocates for all residents.

“I’m aligned with all interests,” he said. “I’m an avid horse person. I’m a country boy at heart. I’m a resident, a father and a grandfather. It’s about having a balance; that’s what I look at.”

Ultimately, Rockett said that he would continue to be a councilman who will push to maintain the town’s rural character while looking out for residents’ tax dollars.

“I feel like I’m looking out for residents in terms of spending their money,” he said. “I’m not interested in spending it. I love our community, and I want to maintain our rural character. The town is still in its infant stages, and I want to help make it a place that we can be proud of.”