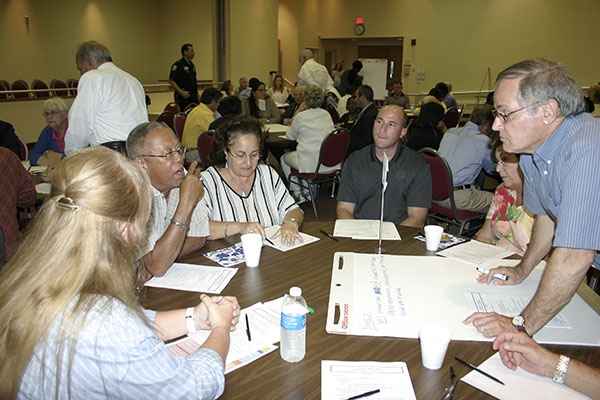 About 40 Royal Palm Beach residents participated in a visioning workshop Thursday, April 11 to provide input on what they would like to see in the village’s future.

Council members and senior staff were on hand to visit different tables of participants during the process and listen to residents as they presented ideas that they thought would make a positive influence on the village.

Many members of the village’s advisory boards also participated in the workshop.

Village Manager Ray Liggins said the purpose of the workshop was to formulate a cohesive vision for the village, explaining that council members and some senior staff had already met in a workshop in November to formulate a strategic plan, which was facilitated by consultant Lyle Sumek, who also coordinated last week’s workshop.

“The goal is a common vision for Royal Palm Beach,” Liggins said. “The process includes community input. That’s what you are here for tonight. What we’re looking for is input moving forward. I believe we share the same vision, and together we will achieve that vision. We are here to get your input and hear from you.”

Sumek said that all ideas were to be written down on large pads provided at each table so he could take all the information and organize it.

“Everything that gets written down is part of the public record, so everything that you write down will be in my report,” he said. “My staff and I sum up as you have written them.”

Sumek said he would write an official summary to include the major themes. “Over the next few days, I will have these on my wall, and I will look through and see what the common themes are that run through the various groups,” he explained.

Group members were asked to listen to others’ comments, avoid making judgments, get all ideas recorded and put stars beside items that received a majority of votes from the respective tables. Elected officials were encouraged to listen with “big ears and small mouths.”

Round One asked participants to list what they considered major successes for the village and why they decided to live in Royal Palm Beach.

Round Two asked them to select three principles from the village’s vision statement — which is to be a premier residential community with a hometown feel and the choice for families, to be beautiful, safe, convenient and enjoyable — and then identify what they want to see in the village by 2028, and what assets are important to preserve over the next 15 years.

Round Three asked participants to prioritize the council’s goals for the village in 2018 that it had agreed on in its visioning workshop — which were to continue to be financially sound, for the village to be more livable from “curb appeal” to convenience, be responsive and provide community-based village services and facilities, and to provide an abundance of leisure choices. Residents were also asked to recommend actions that should be pursued in 2013 to attain these goals.

Round Four asked what issues need to be addressed by the village over the next year, and what was the best way for village government to communicate with them, pointing out that e-mail, posting on the web site or enclosing newsletters in the utility bill might not be the most effective means. He said residents of one city he had consulted with had resoundingly recommended the bathroom wall of a popular local restaurant.

Sumek asked the group to vote on the comments when they were finished recording them.

“If you’ve listed 10 things, what are the four or five that you feel are most important?” he asked. “The council and mayor don’t get to vote. Their job is to listen and not interject.”

The last activity of the evening was for participants to write their own comments to the mayor and council.

“You can write whatever you want, and you don’t need to sign it,” Sumek said. “That will be typed up as part of the public record as well. If you feel something didn’t get emphasized enough, give us that feedback. Tonight is a night to have a little fun. Be relaxed, but also take the time to think about the village’s future.”

Sumek called attention to a strategic planning model that was included in handouts, especially to visioning over the next 15 years, and decisions that have been made, or not been made, in the past five years to get the village where participants feel it should go.

He explained that two cities next door to each other that he had worked with — Boca Raton and Delray Beach — came up with distinctly different visions. “If you compare Atlantic Avenue to Mizner Park,” Sumek said, “they are two very different visions. They’re both right because they’re right for their communities.”

Results for the Royal Palm Beach workshop are expected back at the village by next Thursday, Liggins said.