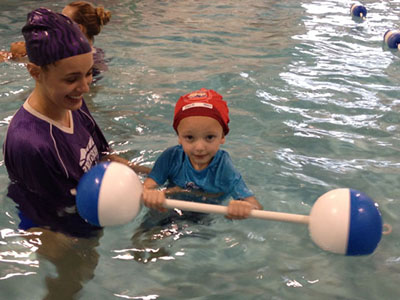 Water overflowed from the giant jet tub, sending toys, soaps and washcloths onto the bathroom floor.

“I dove in expecting to find my little boy Jack at the bottom,” said Wellington father Howie Berkowitz. “It was the longest, most terrifying moment of my life.”

Parents Howie and Sarah Berkowitz realized in that instant — when they saw then 18-month-old Jack trapped but alive between the wall and the tub — swimming lessons could mean life or death. And that’s how Jack became one of thousands of children who graduated from water survival skills class at the British Swim School in Wellington.

The program so impressed the couple that they became owners of the 11-year-old swim school. “We now have the confidence and peace of mind to know Jack can survive if he falls in the water,” Sarah said.

The family was enjoying a typical gathering of parents and friends. The clamor of children running through the house filled the air. “We were in the kitchen talking to the other parents when everyone realized it was a little too quiet,” Sarah said. “Right then, one of the other children came running in and said, ‘Jack in the water! Jack in the water!’”

Hearts sank and two terrified parents ran for the bathroom. It was every parent’s nightmare.

In the swelling panic of jumping into the tub, no one noticed that the boy had managed to perch himself on a ledge between a wall and the tub, trapped from escaping.

When Jack spoke up, relief and tears flowed like water from the tub. “You hear about kids at the bottom of a swimming pool. This was a bathroom tub,” Howie said. “We just couldn’t believe something like this could happen to us.”

May, which is National Drowning Prevention Month, is the perfect time to think about this important issue. According to the Centers for Disease Control & Prevention (CDC), children ages 1 to 4 have the highest drowning rates. Additionally, young children can drown in less than two inches of water.

Like many of their friends, they had thought about swimming lessons for their child, but Jack didn’t really take to the backyard pool, and there just never seemed to be time.

After Jack nearly drowned, now was the time.

Water survival skills decrease the risk of drowning by 88 percent, according to the CDC. Children must know how to survive in the water long enough to be rescued or save themselves. Babies as young as 3 months can learn to roll over on their backs.

“As instructors, we teach survival skills before swimming. We ensure our students are water safe,” said Stephanie Bachar, aquatic manager at the British Swim School in Wellington. “Teaching this way encourages confidence in the water and helps students develop into safe swimmers.”

For more than 30 years, British Swim School instructors have refined the method of a gradual, gentle and fun learning process. Repetition — and a few songs and games — is also key to this training.

In a few months, Jack could jump in, roll on his back and float.

“It was so amazing to see his progress,” Howie said. “Watching all the children learn how to save themselves had such a powerful impact on the both of us that we had to become part of it all.”

After taking over the British Swim School’s Wellington location, tucked into an office park by the popular Village Park, the Berkowitzes put all their energy into spreading the word about the importance of water survival skills for children.

Focusing on water survival, babies and toddlers are taught through a fun, structured program. This class introduces babies to the water and teaches them to float independently on their back for the first time.

Once this critical skill is mastered, the school offers a host of classes to help with a child’s development.

The school also offers adult swim classes, along with private, semi-private and group lessons. Apart from the safety aspect, swimming is also a great form of exercise with overall heart healthy benefits. The school also sends graduates to the local swim team.