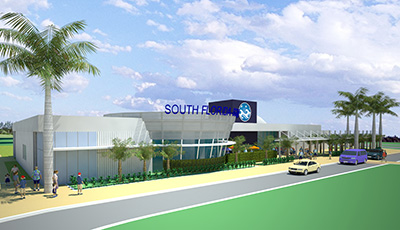 When the public is invited for a free community day Friday, June 7 at the South Florida Science Museum, they will be walking into a newly expanded space under a different sign. Leadership for the more than 50-year-old institution announced its name change at a recent gala event for supporters and unveiled exciting plans for the new South Florida Science Center & Aquarium.

“We are a high touch, interactive center, and we wanted a name to reflect that,” CEO Lew Crampton said. “And by tripling the size of the former aquarium space, we knew that popular attraction had to be spotlighted in our name. The new South Florida Science Center & Aquarium name will be official on June 7, when we host our community day to thank the public for their role in bringing exciting change to this beloved institution.”

In addition, a $900,000 grant from the Quantum Foundation will bring blockbuster exhibits to the expanded venue over the next three years.

“Quantum sees us as the anchor for informal science education in Palm Beach County,” Chairman Matt Lorentzen said. “We want to be a convener for organizations, educators and corporations interested in educating our next generation’s workforce in science, technology and math. We are grateful and excited about this partnership.”

The Quantum Foundation grant will allow the museum to explore booking exhibits such as “Mythbusters” and “Titanic,” among others, in hopes of drawing new audiences and engaging all ages in the new mission of “opening every mind to science.”

The Quantum Foundation also provided underwriting in late 2012 for the museum’s newest permanent exhibit, Science on a Sphere, a room-sized global display system that uses computers and video projectors to display planetary data onto a six-foot-diameter sphere, which looks like a giant animated globe.

The museum spent the past year and $5 million in capital campaign funds on increasing its exhibit space, aquarium and adding new permanent exhibits to the West Palm Beach venue. The museum will grow from 20,000 to 30,000 square feet, and visitors will see changes from the moment they park.

“We’re truly grateful to the community, funders and our own board leadership for paving the way for these exciting milestones,” Crampton said. “Now it’s time for us to step purposefully into our second 50 years by serving the public and educating our children to become the scientists and engineers of tomorrow. It’s time for us to grow from a good museum into the great venue this county and our children and families deserve.”

In addition to a free chance to view the exciting expanded facilities, guests at the community opening event will be treated to the museum’s first blockbuster exhibit to open in the newly expanded space, “Savage Ancient Seas: The Ancient Aquatic Deep.”

When “Savage Ancient Seas” makes its big splash Friday, May 17, guests of all ages will feel like they have taken a dive into time with the mystifying “dinos of the deep.” And divers, beware: the exhibit will educate visitors about how these ancient aquatic creatures lived and died, and which among them survived until today. The exhibit will be on display until mid-September.

Exploring the water world of the late Cretaceous period, which existed over 70 million years ago, “Savage Ancient Seas” will be filled with huge carnivorous marine reptiles, with double-hinged jaws and teeth; gigantic flesh-eating fish, big enough to swallow an adult human being whole; flying reptiles with three-foot skulls; and the biggest sea turtles to have ever lived. The waters of the earth during that time were teeming with beasts just as ferocious as their better-known counterparts on land.

Arriving at the museum just in time for beach season, the popular exhibit is expected to cause more than a few Florida swimmers some curiosity about what really just brushed up against them.

The museum is currently open during expansion construction.

ABOVE: A rendering of the expanded museum’s front entrance.