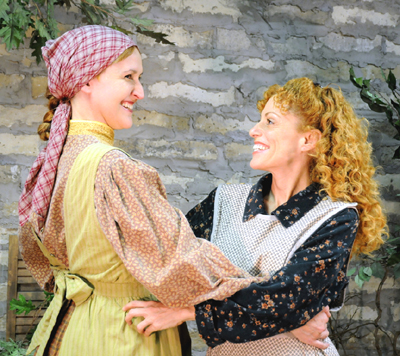 Brian Friel’s finely etched memory play Dancing at Lughnasa will conclude Palm Beach Dramaworks’ 2012-13 season, with performances beginning on Friday, May 24 at 8 p.m. at the Don & Ann Brown Theatre in West Palm Beach. The touching story of five adult sisters will play a strictly limited engagement through June 16, with specially priced preview performances slated for May 22 and 23.

Set in 1936 in rural Ireland, Dancing at Lughnasa tells the poignant story of the Mundy sisters, who make the most of their uncomplicated existence. The Tony and Olivier award-winning play is narrated by the adult son of one of the sisters, who looks back with affection, sensitivity and insight to a summer in his aunts’ cottage during his childhood.

Dancing at Lughnasa was originally presented at the Abbey Theatre in Dublin in 1990. It transferred to London’s National Theatre later that year, and won the 1991 Olivier Award for Best Play. Dancing at Lughnasa opened on Broadway in October 1991 and went on to receive the Tony Award for Best Play. It was made into a film in 1998, starring Meryl Streep.

Born in 1929, Friel is widely recognized as one of the great contemporary playwrights. His breakthrough as a playwright came in 1964 with the Dublin premiere of Philadelphia, Here I Come!, which went on to have successful runs in New York and London.

Individual tickets cost $55 for all performances. Preview performances cost $47 and opening night tickets (May 24) cost $70. Student tickets are available for $10. Group rates for 20 or more and discounted season subscriptions are also available.

The Don & Ann Brown Theatre is located in the heart of downtown West Palm Beach at 201 Clematis Street.

For 13 years, West Palm Beach’s only professional, multi-award-winning resident theater has brought to the Palm Beaches a distinguished roster of plays under the guidance of Producing Artistic Director William Hayes.

ABOVE: Julie Lowe and Margery Lowe in a scene from Dancing at Lughnasa. Photo Courtesy Alicia Donelan