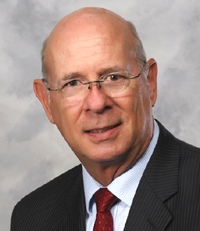 Palm Beach County’s 2013 estimated property tax values were announced this week and for three area municipalities the news was great, average and not so good.

Overall, the county’s tax base grew for the second year in a row from $125 billion to $129 billion, according to figures released Wednesday, May 29 by Palm Beach County Property Appraiser Gary Nikolits (shown above). That’s a 3.7 percent increase over last year.

Wellington saw the biggest property values increase of all municipalities countywide, up 6.6 percent over last year, from almost $5.4 billion to $5.76 billion. And of the 38 cities and towns that make up Palm Beach County, only four saw a decrease in property values. That included Loxahatchee Groves, which experienced a 4.4 percent dip. Its taxable value dropped from almost $180 million last year to $171.9 million this year.

The property values are based on sale prices from 2012. Tax notices won’t go out until late July. And then politicians will have to make decisions about whether or not to change property tax rates to avoid increasing taxes.

For now, most officials are glad the numbers released this week bring an end to a downward spiral that began in 2008. But it’s too early to tell what if any impact this may have on property tax rates this year.

Loxahatchee Groves Town Manager Mark Kutney was somewhat surprised by the figure. About a month ago, Nikolits told him the preliminary estimated taxable value would be up over the previous year.

“It went down more than I thought it would,” he said.

John Thomas, director of residential appraisal services for Nikolits’ office, agreed with Kutney’s assessment. There just isn’t a lot of demand for agriculturally designated land. Even though values increased significantly in Loxahatchee Groves during the boom, it has been slow to recover, he said.

“I was hoping it would have stabilized last year,” Thomas said.

Wellington Village Manager Paul Schofield characterized the 6.6 percent increase as very good news and said he hopes to be able to restore some services that were cut in previous years.

“I’m really happy to see that rate. We knew it was going to go up, but we hadn’t been projecting this much. Last year was just a little over 1 percent,” he said.

Wellington’s estimate of taxable value is $5.76 billion this year vs. $5.4 billion last year. Schofield attributes that to a rise in new construction.

“New construction is up to $84 million from $61 million last year. We have seen improvements on all fronts,” Schofield said.

Thomas expected a much smaller increase, between 2 and 2.5 percent, he said, so he was also surprised by Wellington’s figures. He agreed Wellington is making a strong comeback.

Schofield said that Wellington has been seeing a trend toward increasing values.

“The new housing construction and housing sales have been picking up, which are indicative of an improving housing market in Wellington,” he said. “Our rates are up about 6.2 percent. At the current millage rate (2.47) we will see about $785,000 in additional ad valorem taxes. We can begin to put back in some of the services we cut over the years. I think it’s a really good sign.”

Wellington will use the additional revenue to improve drainage and keep up with maintenance, Schofield said. He noted that last year’s Tropical Storm Isaac, which saw major flooding in the community, highlighted some drainage issues. Isaac dropped more than 18 inches of rain on Wellington in 36 hours.

But he isn’t going to make long-term decisions about the village based on a year’s worth of data, either.

“This is two years of recovery. You never want to make long-term decisions based on one year of improvement,” Schofield said.

“We’re where we were hoping to be,” he said.

After five years of decreases though, it’s nice to have a surplus, Liggins said. And he hopes the trend continues.

The village is stable and balanced with a good mix of commercial and residential properties, much like the county, Thomas said, adding he was glad to see mid-range priced properties starting to come back.

Overall, Thomas is hopeful the market is beginning to stabilize.

“I can’t predict the future — there are still some pockets of distress — but it looks promising,” he said.