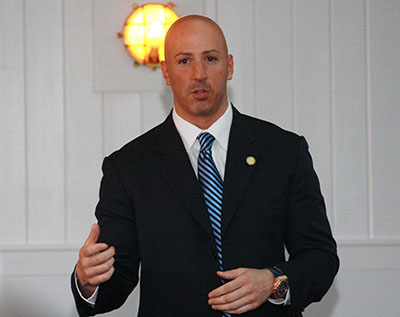 Members of the Wellington Chamber of Commerce got a legislative update from State Sen. Joseph Abruzzo (D-District 25) and State Rep. Mark Pafford (D-District 86) at a luncheon held Monday, June 17 at the Wanderers Club.

Abruzzo said that he felt this past legislative session was one of his most productive yet. “This session was probably the best session that we have had in Tallahassee since I’ve had the pleasure of representing you,” he said.

Abruzzo noted it was the first year that he voted in favor of the budget.

“For the first time, I was able to support our budget openly,” he said. “The budget brings no new taxes to Florida and no fee raises. We put more than $2 billion in reserves, and we increased our education fund by over $1.5 billion.”

Abruzzo said that he was able to help secure funding for several district projects, but that funding for a new Palm Beach State College campus — one of his key goals — was vetoed by Gov. Rick Scott.

“Nonetheless, we’re going to continue to fight for it every year and hopefully one year we’ll get the governor to sign off on it, and then we’ll have a campus out this way,” he said.

The budget also put more money toward economic development and bringing jobs to Florida, but also has provisions to ensure the money goes to actual job creators.

“We wanted keep track of [the money] and make sure it’s going to businesses that are succeeding in Florida and creating jobs,” he said.

Abruzzo also initiated several measures that passed, including termination of parental rights for rapists and a criminal gang prevention act.

He noted that Florida has seen an increased problem with gangs, and the state is considered a gateway to smuggle narcotics into the country.

“We noticed in the last few years that gangs have been recruiting children younger and younger,” Abruzzo said. “We made it an automatic felony if a gang recruits a child in school, and we stiffened our school trespassing laws. If they come on school property to recruit children, it’s also an automatic felony.”

Another bill he co-sponsored was a texting and driving bill that would have made it a primary offense to text while driving. “It got watered down in the House and came back as a secondary offense,” he noted.

Abruzzo stressed that texting and driving is now illegal, but noted that as a secondary offense, a driver must be pulled over for another infraction.

“A driver could say that they were looking at their GPS or turning the phone off, and there’s no way that you could truly issue a citation,” he said.

To rectify this, Abruzzo said there are plans to bring the bill back again as a primary offense. He also plans to stress that texting and driving is especially dangerous for new teen drivers.

“It took years to get our seat-belt laws passed,” he said. “I do suspect that this will take several years. I’m hoping we can at least get this banned for our children as a primary offense for when they are first learning to drive. I’m worried about everyone, but our children are truly important.”

But there were some disappointments, Abruzzo said, noting that the House of Representatives did not pass a measure that would have netted the state $51 billion over 10 years for healthcare.

“I think that was one of the biggest failures,” he said. “What is going to happen? That is a big question mark. A lot of people have different theories. But the bottom line is we know it, the governor knows it and the speaker knows it — we have to get it done.”

Abruzzo expects a special session called by the governor regarding healthcare reform. Like before, he expects that the Senate would likely pass the measure, but the House could continue to stall.

Pafford now represents most of Wellington after district boundaries were redrawn last year. He noted that contrary to some people claiming he votes no on everything, he voted in favor of 285 out of 372 bills put before him.

He said that passing a bill to expand Medicaid was crucial for Florida to take care of its neediest residents. Currently the system funds $14.4 billion annually to people within 22 percent of the poverty line.

“That means if you are a single parent with a child who needs Medicaid — and more than 50 percent of our Medicaid dollars go to kids — you would have to make no more than $3,500 annually to be eligible for our current system.”

But by accepting the $51 billion in expansion money, Pafford said Florida could raise that annual income level to $20,000 for a family, cover an additional 1.1 million people and save the lives of 5,000 more people annually.

Pafford said the decision lies with Speaker Will Weatherford. “It’s imperative that we find at least 16 Republicans… to push him to move in the direction of a Medicaid expansion,” he said.

Not accepting the expansion could have repercussions for businesses in the state, he said.

“If you have more than 50 employees, you’re going to pay for the speaker’s decision,” Pafford said. “Hospitals are going to get nailed, because now they have to cover a [larger] uninsured gap.”

Pafford said that needy residents also took another blow when the legislature removed several key funding allotments for seniors, children with disabilities and families in need of child care.

“The 35,000 seniors who need help brushing their hair and their teeth? We left them behind,” he said. “The 20,000 people who are on a list waiting for plans for their children’s care — because sometimes parents die before their children — we forgot about them. Some of them have been on a list for more than 10 years waiting for a plan for their developmentally disabled child. There are 58,000 children statewide and upward of 6,000 in this county who don’t have supplemental child care so their parents can go to work… These are some of the reasons I voted against the budget.”

Pafford said the primary reason he voted against the budget is because Weatherford, as speaker, gets to make the sole decisions on allocations in the budget. “I found that no one is allowed to ask the speaker if road projects might be put off so that we can cover all those people on wait lists,” he said.

He also noted that the budget did not fund a prescription drug monitoring program, without which approximately seven people die every day. “We have a budget that is not in touch,” he said. “We have a speaker today who is not in touch.”

Pafford encouraged chamber members to contact their representatives, as well as Weatherford, if they are concerned about the issue.