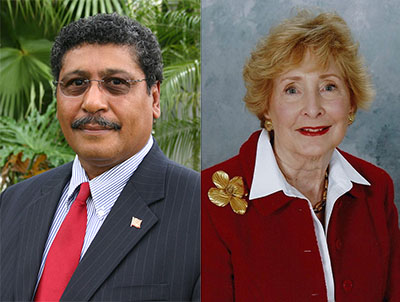 The race for the Palm Beach County Commission District 6 seat got off to an early start this week when two candidates announced they’re running to replace term-limited County Commissioner Jess Santamaria in November 2014.

Former Wellington Mayor Kathy Foster and Royal Palm Beach Councilman Fred Pinto will seek the Democratic nomination for the open seat in the August 2014 primary election, though more candidates are expected to emerge.

Foster is a 34-year resident of Wellington who helped shape the village in its infancy.

“I have toyed with the idea [of running for the Palm Beach County Commission] for several years,” Foster said. “It seemed like the next logical step, and it is an open seat.”

In 1990, Foster became Wellington’s first directly elected public official when she won a seat on the Acme Improvement District Board of Supervisors, Wellington’s pre-incorporation government. She served as president of that board from 1993 to 1995.

When Wellington sought to incorporate, Foster was one of the leaders in the movement. In 1996, she was elected to the inaugural Wellington Village Council and was appointed Wellington’s first mayor, serving two years in that role.

She is also a founding board member of the Central Palm Beach County Chamber of Commerce.

“I’ve lived and worked in the western communities for 34 years in multiple roles,” Foster said. “I’ve participated in the community through the chambers and with my own small company, through serving in public office and nonprofit work. I have a really diverse background of experience to bring to the table, and I think that crossover knowledge would be very beneficial.”

She said that her experience will help her work with other commissioners to build consensus. “I have a reputation as a consensus-builder,” Foster said.

If elected, Foster said she would continue to be a supporter of the Office of the Inspector General. “I think it’s absolutely necessary,” she said. “I would help to resolve the conflict with several municipalities and let the inspector general do the job she was appointed to do.”

Foster would also focus on the Glades, working to help move along the planned inland port.

“I’m fascinated with the opportunity the inland port presents to the Glades communities, which need an economic engine,” she said. “I would work with developers looking to build it, and put safeguards in place to make sure the people of the Glades get jobs first.”

Foster also said she would focus on building employment skills for Glades residents. “It would be part of the regrowth of that area,” she said. “If the residents don’t have the skills necessary, I’d work to get them the training they need.”

She noted that the inland port would be a boost not just to the Glades but to the entire community. “It would be an asset for the Glades, but also for Palm Beach County,” Foster said.

Though a decision on the extension of State Road 7 now rests with the Florida Department of Transportation, Foster said she would continue to be an advocate for the extension while also looking to address any concerns about the road.

“The State Road 7 extension has to happen,” she said. “It has been on the books for a long time, and it’s important that it gets done. I think the concerns of the Ibis community need to be addressed, but I think the State Road 7 corridor can be built without impacting their community.”

Foster also said she would be a voice for The Acreage as it looks for ways to manage its drainage woes.

“I’d be an advocate for the community and a voice for the people,” she said. “They have honest and fair concerns about drainage.”

Finding a solution will take leadership and bringing people together to make decisions, she said. “It’s time for everyone to come to the table and discuss an answer,” Foster said.

Foster hopes voters will take time to meet and talk with her as the campaign continues.

“I ask the voters to give me an opportunity,” she said. “Meet me over the next year and a half and hear what I’d like to do. I’d love to hear what their concerns are.”

Pinto is a current Royal Palm Beach councilman who has held office for more than 10 years. During that time, he helped the village grow, making important decisions that have helped the community weather tough economic times.

“I’ve been very successful in accomplishing what I wanted to accomplish,” Pinto told the Town-Crier Tuesday. “I have been able to bring a business perspective to the council.”

He is a retired lieutenant colonel in the National Guard and served as a battalion commander in the Persian Gulf War. Pinto also spent many years on Wall Street, working with three major banking firms and a large software company. He holds a bachelor’s degree in business administration from Fordham University.

For the past several years, he has worked for Santamaria in the county commission office.

“It’s given me an advanced degree in county governance,” Pinto said. “I think I will be able to do a very competent job working for the people in District 6.”

Though he has worked closely with Santamaria, Pinto said he would be his own man on the commission.

“I think very highly of Commissioner Santamaria,” he said. “He is a high moral integrity individual, and we have that in common. But I am also my own man. I have my own approach to how to go about getting things accomplished.”

If elected, Pinto said he would continue to push for ethics reform.

“I’m not interested in pointing fingers,” he said. “I want workable solutions to get things accomplished, which is something I look to do with every issue.”

Pinto would also use his business experience to help the county’s business community. “I want to see the business climate in our county progress in a good way,” he said.

Pinto said he would work hard to help the Glades communities, starting from the basic building blocks.

“You have to walk before you can run,” he said. “With the Glades, I think there are very tactical things that we need to think about doing. The building blocks need to be in place.”

He said he is supportive of the inland port, adding that his military experience dealt with transportation.

“It’s very important, and I plan to take the initiative and roll my sleeves up,” he said. “As expansion happens at the Panama Canal, supertankers will be coming in that the Port of Miami will not be able to handle. We are going to have to have the inland port to provide a place for the goods to go. Then we’ll have to have a rail and truck system to move goods through the state.”

Pinto said he also has concerns for the future of drinkable water.

“How we come up with solutions today will set the standards for tomorrow,” he said. “I want to begin the process today so we don’t end up with water costing more than a gallon of gas.”

Regarding drainage problems in The Acreage, Pinto said he believes a regional drainage plan needs to be drafted.

“What we need to do is get all of the parties involved together… and talk in terms of a regional drainage strategy,” he said. “Based on the research, there is the capacity available. A lot of moving parts need to come together to get the kind of relief The Acreage needs. It can be done, and I’d look to provide the leadership to work with the right folks.”

He is also in favor of the SR 7 extension to Northlake Blvd. “It’s moving along,” Pinto said. “It’s going to happen. This is a transportation lane we need to have going north and south.”

Ultimately, Pinto said he hopes voters will see him as a leader who works to accomplish things.

“I’ve demonstrated that I’m a consensus-builder,” he said. “I know how to work behind the scenes and get things done.”