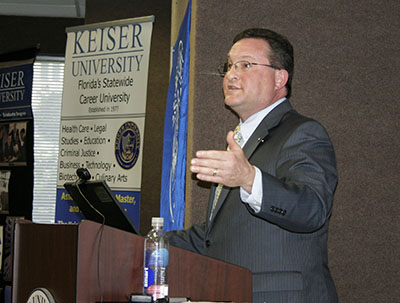 Discussion at State Rep. Mark Pafford’s town hall meeting on the 2013 legislative session Thursday, May 30 at Keiser University in West Palm Beach included his assertion that the state’s new $74 billion budget did not include enough detail on how it would be spent.

In a video of the budget discussion in Tallahassee on May 3, shown at the town hall meeting, Pafford (D-District 86) explained why he would not vote for the budget. He acknowledged that some great projects were included, but questioned why 35,000 people in Florida were on waiting lists for healthcare and other aid while the legislature allocated money for road beautification.

He added that 20,000 people have languished on lists for 10 years waiting for services for their children who have disabilities.

“Here’s the irony,” Pafford said. “The legislature spends 60 days in session to talk about these things, folks, and we don’t. We’ve got the entire committee process to talk about these things, yet we don’t. In Palm Beach County, it’s 12 months that they’re rolling down the budget and figuring out what a slight percentage change in ad valorem taxes might do to somebody’s trash pickup. They do it for a year, and their budget is $3 billion.”

He also pointed out that the Town of Haverhill spent six months discussing its $1 million budget. “You know why? It’s because they’re responsible,” he said. “They take time. What do we do [in Tallahassee]? We pass a $74 billion budget in committees where we refer to the people sitting in committees not as the public but as an audience.”

Pafford said the legislature has gotten used to a process that doesn’t connect with the people sitting outside trying to find a job or healthcare. “The papers will report that we’re putting in another road and all those palm trees are going up, and all that pavement and a lot of different projects,” he said. “Are they as important as the people we are leaving behind? I don’t think so, and nobody has asked me why I don’t vote for a budget. The budget is not plugged into the reality that is happening outside the chamber.”

Pafford also discussed why the legislature did not accept $51 billion from the federal government to expand healthcare to more people.

“There are basically two reasons, but the answer to each reason is essentially the same. That’s on tape, too. It’s really funny,” he said, explaining that the majority’s answer was that the federal government might not be able to pay. “They may change their mind and because as a state legislature, we decided to build a system on this expanded healthcare, if they change their mind, well, we’re going to be stuck with all these people, and if we go through a recession, or worse, the federal government may basically go belly-up and we’re going to have no money.”

Pafford said he asked for an example of the federal government not making its committed contribution to Florida under its current Medicaid system, and nobody offered one. He pointed out that the approved budget contains $14.4 billion of federal money already financing Florida’s current Medicaid system, and that the U.S. government never has failed to pay.

He also reminded budget makers that between 2008 and 2011, the federal government gave billions to Florida so that the state could balance its budget during a recession.

Pafford said reasoning that the federal government might fail to pay if the nation goes into another recession or depression made no sense. “We’re not going to go belly-up,” he said. “I don’t believe that. It’s really not a good argument.”

Pafford added that it was hard for him to believe that the legislature refused the money when every major business organization, including the Associated Industries of Florida and the Florida Chamber of Commerce, supported accepting it.

“It helps the economy, it grows jobs, it’s the type of thing that’s great,” Pafford said. “The second-largest economy in Florida is the retirement industry.”

A member of the audience asked why such illogical answers are accepted, and Pafford replied: “The questions I was asking, they were getting very aggravated, and the speaker, basically said, ‘Look, it’s time, move on.’ You don’t have to yield to a question if you don’t want to. You don’t have to answer logically, obviously.”

Another person asked what has been done to combat voter suppression and restoration of voter rights, and Pafford said he was not optimistic, despite changes that were made allowing election supervisors to open more early-voting locations and putting Florida back to 14 days of early voting rather than eight last year.

“I don’t think the governor is going to really move,” Pafford said. “God forbid we actually allow certain people to vote, because they might not vote like we do. I’m being nice.”

Pafford said Palm Beach County Supervisor of Elections Susan Bucher, a former state representative, did a great job working behind the scenes in Tallahassee to get the early-voting law enacted.

“I think she might agree, like I might if I ever do something different than this, maybe I’ll have the opportunity to get something done in Tallahassee,” he said.

He said Scott did not support the bill because he said it applies retroactively and thus tampers with the settled economic expectations of many Floridians who have experienced divorce. If the bill had been enacted, Florida would have become the fifth state to end permanent alimony.

Pafford said he did not favor the bill himself because he thought it had flaws.
ABOVE: State Rep. Mark Pafford speaks at last Thursday’s meeting.