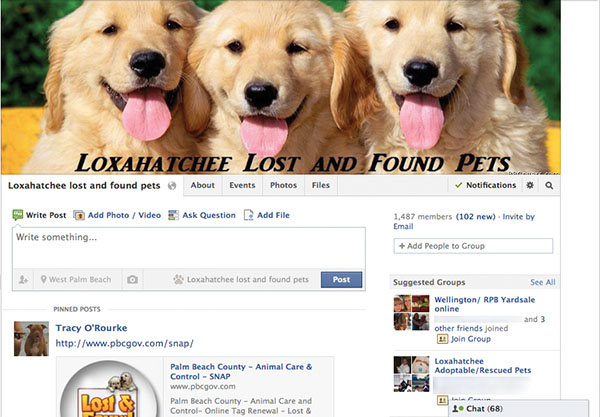 A new Facebook page, Loxahatchee Lost and Found Pets, was especially busy during and after the Fourth of July celebration, with many success stories.

Page founder/manager Gail Bass said there was a noticeable increase in activity around the holiday, as there is during storms.

“That’s when a lot of the dogs get skittish, they run, and that’s when you see a lot of activity on the site,” she said. “But we really did good on the Fourth of July.”

That means many recoveries, and the page also put out valuable information before fireworks shows and expected thunderstorms about what to do to avoid losing one’s pet. There is also information on the page about collars and tracking devices, as well as animal rescue groups, such as Big Dog Ranch Rescue, Palm Beach County Animal Care & Control and the Peggy Adams Animal Rescue League.

“All that stuff is listed for members to access easily to get right on to search for their animal,” Bass said. “Anything that we find useful, we will post on there for group members to access to help them recover faster.”

There is also a section on the page showing animals that have been recovered.

Bass started the site seven months ago, and it has now grown to more than 1,500 members. In that time, about 80 lost pets have been returned to their owners.

“I was on the Acreage Landowners’ Association page, and I saw that somebody was missing their pet, and it just touched me,” Bass recalled. “I decided that there has got to be something we can do to find these animals quickly, before they get too far.”

That is when she took action and set up Loxahatchee Lost and Found Pets.

“The word spread, it started to grow and people just started pulling together,” Bass said. “This area is just so tight when it comes to neighbors helping neighbors.”

Now that the main site is running, Bass recently started a sister group for rescues and animals that need to be adopted, and she hopes to expand Loxahatchee Lost and Found Pets to surrounding areas.

“It’s starting to spread,” Bass said. “I noticed that we’re already into Royal Palm Beach, and we’re down into Wellington. Because it is starting to expand, we thought we could do different areas.”

That would make for easier categorization and faster growth.

The aim of a new web site is to help owners find their pets as quickly as possible, Bass said, explaining that she has taken on some web administrators to accommodate people who might want to join in the middle of the night. “Somebody’s always up,” she said. “We’ve already got a domain name in the works, and the web site will be up in the next couple of weeks.”

Meanwhile, the existing page has extended its reach all the way into Stuart. “One guy’s dog ended up in Stuart, and we got it all the way back from up there,” Bass said. “Somebody picked up the dog and decided they wanted to keep it. With word of mouth, somebody had seen this person with that dog, and we tracked it all the way up there.”

Bass said there seems to have been an issue lately with small pedigree dogs being reported missing. “They’re the ones that you would buy at the pet store, the little designer doggies,” she said. “There’s four or five; a lot of them seem to be missing off of Sycamore and 180th Avenue North. We’re having a really hard time finding them. I’m wondering if someone is coming around and picking up these little dogs and taking them somewhere else and reselling them. I hate to think that, but it has crossed our minds.”

Bass had a meeting with Palm Beach County Animal Care & Control Director Dianne Sauve this week. “She’s going to work with us because she said we have really been helping them a lot, and they’re helping us out, too,” Bass said. “Everybody is just so good on helping out here. It’s amazing.”

She credits Acreage residents for their support. “I couldn’t do it without them,” Bass said. “It’s everybody’s help and support, and all of us working together.”

Sometimes, members will also go out and physically help people locate their pets.

“We put a sign up — some woman had lost her dog, and she was beside herself,” Bass said, explaining that she and another member of the group went to help. “We put the signs up, and within a half-hour we had reunited them.”

So far, awareness of the site has been largely through word of mouth, as well as fliers at Red Barn Feed and banners at community events. “It’s really word-of-mouth,” Bass said. “And when somebody finds their animal real quick, they go and tell everybody.”

Bass encouraged as many people as possible to join Loxahatchee Lost and Found Pets on Facebook to further improve the effectiveness of the site. “The more we can get, the faster we can get these animals reunited with their owners before something happens to them,” she said.