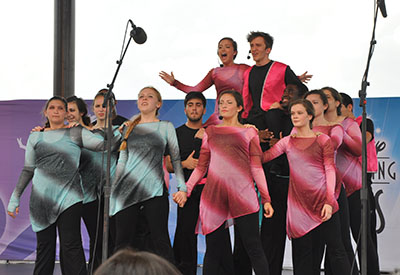 Created in partnership with Disney on Broadway, the workshop blends Disney magic into the glitz of live musical theatre. Students perform a number from a Broadway musical and learn about the elements required to bring one together, including music, staging, costuming and props. They performed a piece from Mary Poppins.

Under professional guidance they learned such Broadway tools as:

• The importance of a proper warm-up before any performance or rehearsal.

• Rehearsing choreography by lyrics rather than by counts.

• Focusing on breath control and diction integrated with movement.

• Learning how to make appropriate vocal/acting choices for a musical composition and its lyrics.

• Analyzing what makes a musical different from a play.

• Discovering techniques for quickly learning and remembering movement and lyrics.

• Understanding the purpose of blocking and staging, and learning theater-staging terminology.

The Second Stage Players performed a condensed version of Aladdin for a full house in Downtown Disney on the Waterfront Stage on June 9.

Following the performance, the group got a message of approval from professional Disney performer Matthew Soverns.

KWP Productions, headquartered in Jupiter, is dedicated to inspiring the next generation of performers and theater goers. KWP loves working with young people to create shows for young and old alike. The company strives to teach actors about the craft of acting, as well as the process it takes to create a full-scale production. For more information, call (561) 339-4687.