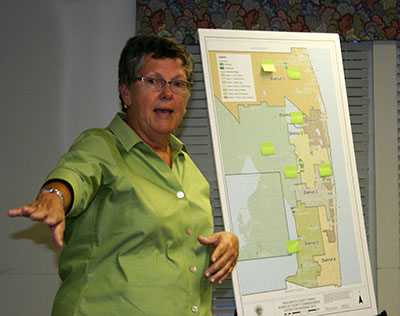 There is a growing number of equestrian trails in Palm Beach County, and county officials hope to slowly continue increasing the trails over time.

That was the message of Linda Wirtz, program director at the Jim Brandon Equestrian Center, and Ginny Powell with the Palm Beach County Department of Environmental Resources Management, when they met with members of the Loxahatchee Groves Landowners’ Association on Thursday, July 25.

Wirtz noted that Jim Brandon itself has more than 8 miles of horse trails as well as open riding areas and arenas with spectator seating. A half-dozen other county parks also have horse amenities.

“Palm Beach County is an equestrian paradise,” Wirtz said. “We have every level of competition and facility throughout the county. Some people are surprised to find out that Florida ranks third in economic impact on a national level.”

In equestrianism, Florida ranks just behind California and Texas.

“Palm Beach County is a major entity, as is the Ocala area,” Wirtz said, explaining that the racetracks in Miami-Dade and Broward counties also account for a large portion of the industry in Florida. “Palm Beach County really has the most diverse equestrian industry, I think, within the state, from trail riding and polo to 4-H and pony camp, as well as hunter jumper and dressage and so on. We really do have a great diversity.”

The riding areas and trails at Jim Brandon are open 365 days of the year from sunrise to sunset, and there is no charge for their use, Wirtz said, explaining that the facility complies with state and federal laws such as helmets for riders under 16 and the requirement of a negative Coggins test.

“We also have some general rules posted, such as the basic, ‘Don’t do anything incredibly stupid,’” she said.

Other parks with horse trails include Riverbend Park west of Interstate 95 and south of Indiantown Road, which is expected to be the hub of a countywide network of horse trails one day. “It has an extensive amount of trails, and there’s places you can park,” she said. “It’s really very beautiful there.”

Next up for Jim Brandon, Wirtz hopes to get a trail ride vendor on board.

“One of the things we are looking to do is to obtain a vendor that will provide trail rides,” she said. “So you can pay a fee and be able to go trail riding but not have the expense of the horse.”

Not only are the trails free to use at Jim Brandon, there is no fee to watch most the events put on there. Only occasional special events, such as a rodeo of the World Dressage Masters, charge a fee.

The 4-H Club is also a frequent user of the center. “I’m particularly interested in working with the kids,” Wirtz said.

Powell explained the county’s effort to increase the connectivity of its greenways and trails through a program called the Northeast Everglades Natural Area (NENA).

“Historically, this area was the headwaters of the Everglades,” Powell said. “The vision 10 years ago was to connect all this stuff, not just conservation lands but the east coast corridor, the cord that goes up and down A1A, the Lake Okeechobee Scenic Trail, all the conservation land, Busch Wildlife and all the parks. Riverbend is the hub, and the idea is that everything radiates out from Riverbend.”

Powell said that NENA is still a vision and there are missing links.

“We don’t have all the answers, and there are complicating factors with connectivity,” she said, explaining that many of the public natural areas are separated by privately owned land, highways and canals. “It’s one thing for a pedestrian or a cyclist, but for an equestrian, it’s very dangerous.”

However, Powell stressed that the county is actively working on the issue, although it might take 10 or 20 years before it is all connected.

There are already a half-dozen named equestrian trails radiating out from Riverbend Park. “There’s a trail coming out of Riverbend on the southeast corner,” she said. “That’s going to put you across a bridge on the east side of the C-18 Canal onto the Bluegill Trail. A lot of these NENA trails are on canal banks.”

Amenities on the trail include chickee shelters and overlooks. “It’s about 5 miles from Riverbend Park to the Sandhill Crane access point at PGA Blvd. and the C-18 Canal,” she said.

There is also a stretch from PGA Blvd. to Grassy Waters Park on Northlake Blvd., which is currently listed as a future trail, although it can be ridden now.

“It’s fine for horses, but coming down Bluegill to PGA, you’ve got a road, and that’s an issue,” she said. “There are future plans to add a safe crosswalk, crossing lights and warnings to motorists that this is an equestrian crossing.”

She clarified that the trails are multipurpose, for hiking, bicycling and riding. “When you get down to the Beeline and Northlake Blvd., it’s much more complicated,” she said. “That’s a problem that’s not likely to be resolved for a long time, but the idea is that we connect to Grassy Waters.”

The Historic Jupiter-Indiantown Trail, which has some connection issues, comes out of the north end of Riverbend Park and extends to Indiantown. “That is actually a historic roadbed,” Powell said. “You can still see portions of the historic roadbed there.”

A big issue with the completion of that trail will be a crossing for the St. Lucie Canal and Indiantown Road.

“Once you do get across, you’re in the Cypress Creek Natural Area,” she said. “We built a trailhead there, and you can trailer your horse to Cypress Creek, and we did construct a section of trail 2 miles through our natural area. It’s a shellrock road. It’s only a small portion, but you can actually pick up and go through a portion of Jupiter Farms, and then you can go through the Hungryland Environmental Area, which is a state facility.”

Portions of the historic roadbed west of Hungryland go through private property with gates.

“The fact is that nothing is completely connected at this point in time, and it’s going to be a while,” Powell said. “These are pieces of trails — 2 miles here, 5 miles there — so there’s still quite a long ways to go, but you can stay on the old canal levees and still use these trails.”

A big challenge for the new trail system will be connecting to the J.W. Corbett Wildlife Management Area, because the north side of the trail is separated at the Beeline Highway with a guardrail. But once a solution is figured out, Corbett connects to the DuPuis Wildlife & Environmental Area, which abuts Lake Okeechobee to the west.

Once at the lake, it has a trail that goes completely around the body of water. However, repair work on the Herbert Hoover Dike also has portions of that trail temporarily closed, Powell said.

For more about the county’s equestrian trails, visit www.pbcgov.com/parks/equestrian.