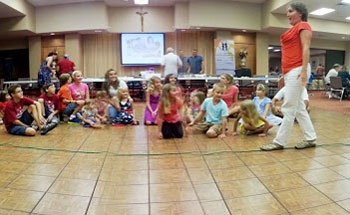 Palm Beach County Substance Awareness Coalition (PBCSAC), a nonprofit organization aimed at creating a drug-free environment for the community, is urging all families to plan frequent family dinners as a way to combat substance abuse.

In 2001, CASA began a grassroots initiative called Family Day, which has blossomed into a nationwide celebration. Family Day promotes parental engagement as a simple and effective way to reduce children’s risk of smoking, drinking and using illegal drugs.

PBCSAC is thrilled to be bringing the movement here. A pilot program was recently launched at Our Lady Queen of Apostles Catholic Church in Royal Palm Beach, where nearly 100 people participated.

Sheila Fulkerson, a local mother of eight children, participated in the initial dinner.

“I loved the conversation starters,” she said. “It helped me connect with my kids in new ways that I can use at home.”

Studies show that teens who have numerous family dinners are more likely to report positive relationships with their parents and share more about what is going on in their day-to-day lives.

“The magic of the dinners is not the meal, but the conversations that take place around the meal,” PBCSAC Director Jeff Kadel said. “If you knew that taking the time to sit down to dinner five to seven times a week with your child would more than likely help your child lead a drug-free life, why would you not take the time?”

The initiative is generally celebrated on the fourth Monday in September, but the concept can be employed anytime during the year.

PBCSAC has a toolkit at www.pbcsac.org to describe how any faith-based organization, school or community can help establish this movement in their social circle.

ABOVE: Susan Foley of Innovative Leisure teaches parents and kids games to connect with each other.