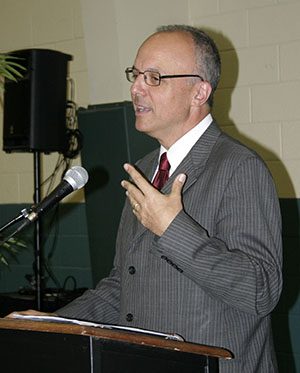 Speaking at a luncheon held Monday at the Greenacres Community Center, Deutch began by thanking the chamber for working with State Rep. Lori Berman (D-District 90) to put on a job fair Oct. 1 at the Lantana library, 4020 Lantana Road, from 9 a.m. to 1 p.m., which he said is the kind of activity that will help recharge the economy.

Deutch said had enjoyed being back at home while Congress was out of session to hear from the people he represents.

“I go back to Washington tomorrow, and I always enjoy my time at home because it gives me the opportunity to see my constituency and learn from all of you,” he said. “Your chamber has been a terrific resource to me since my election. The men and women who are involved with the chamber really represent some of the greatest drivers of economic growth here in Palm Beach County.”

Deutch said local business and opinion leaders’ desire to move South Florida’s economy forward is a welcome change to what he sees as obstructionism in Washington.

“The Central Palm Beach County Chamber represents dozens of businesses large and small, an array of industries from media, manufacturing, law, healthcare, insurance and really everything in between,” he said. “Members may not agree on every issue, but I know as well as anyone that sitting in this room today are some Democrats and some Republicans, some independents, and I imagine there are a fair number of you who don’t really like politics these days, which I really can’t blame you at all for.”

He congratulated chamber members for their collaborative efforts in getting the local economy moving again. “You are well aware you can accomplish so much by working together, [rather] than by working against each another,” he said, explaining that he wished that model would be used in Washington.

Through 2013, the economy has continued a long and slow recovery from a five-year financial crisis, but it has not been recovering fast enough, Deutch said.

“We’ve added jobs, but not as many jobs as we need,” he said. “Too often we forget how deep the hole was.”

Deutch explained that between 2007 and 2010, the economy lost 3.7 million jobs, and if job growth continues at the current rate of about 165,000 per month, it will take at least another year to return to the level of employment in December 2007. It will take even longer to reach full employment, given that there are more Americans now looking for work.

“If you want to achieve full employment, economic growth is going to have to pick up the pace substantially,” Deutch said. “The question is whether or not Washington is up to the task, and that, frankly, is where I believe leaders like you fit in.

From infrastructure to the housing market to public schools, Deutch said local business leaders can show Congress the correct path.

“We need Congress to recognize that finding common ground is the only way to move forward,” he said. “We need more bipartisan collaboration instead of relentless obstructionism. And we need more compromise instead of ideological extremism that too often generates the headlines.”

“Investments in infrastructure and education are great examples,” he said. “Unfortunately, some of my colleagues in Washington seem to have forgotten the importance of infrastructure to the business community. They have turned investment into a dirty word, yet we know that investment hinges on the promise of return, and that’s why it’s so important for us as a country to invest in the 21st century infrastructure that’s going to allow us to compete with other international competitors in a global economy.”

He pointed out that the construction industry has not fully recovered from the recession.

“It’s time, I think, that we put those engineers and contractors and workers back on the job doing the work that America knows needs to get done,” Deutch said. “Unfortunately, infrastructure is just one of the investments that we know we should be expanding, but instead are being subject to massive cuts through sequestration.”

Those cuts will come back to haunt the nation, he said.

“When it comes to education, we are already seeing the effect of sequestration,” Deutch said. “We see it in the elimination of 50,000 Head Start slots for the programs that should be starting this fall. It’s happening at a time when we all know, and the research bears this out, that early childhood development can help narrow the achievement gap that sets things up for success.”

On college campuses, sequestration is slashing federal work-study programs for students who are trying to support themselves in school, and slowing down medical research that can also lead to new treatments and cures for cancer, Alzheimer’s disease and other illnesses, Deutch said.

“Tomorrow I’m going back to Washington, and at the top of our agenda, where it should have been for the past three months, we will hopefully reach a compromise to keep the government running beyond Sept. 30,” he said. “The kind of brinksmanship that has been played in Washington has plagued our budget debates, and it’s not good for our economy. It prevents us from taking a long view, the view that any business owner takes. In working together, we address the many challenges that confront the nation in the 21st century.”