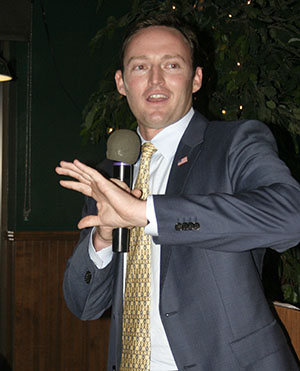 Congressman Patrick Murphy (D-District 18) spoke to the Mid-County Democratic Club on Monday about the challenges of getting a national budget approved when the opposing party’s solitary goal seems to be destroying the Affordable Care Act.

Murphy was the featured speaker at the club’s monthly meeting Monday at Tree’s Wings & Ribs in Royal Palm Beach.

“You never know what D.C. is going to bring you, but this last two weeks have been one of the more interesting times, and I’m certainly happy we didn’t have to vote on Syria,” he said. “That would have definitely been the toughest vote I ever took, and I do not think that there was a win scenario. I’m glad that diplomacy is playing out.”

Murphy said that despite a sharply divided Congress, he has tried to take a bipartisan approach.

Murphy said he recently called a Republican congressman from Ohio about reaching a compromise on the budget.

“He’s a Republican, about as moderate as I thought there was, and I called him about what we’re going to face tomorrow when I return to D.C.,” Murphy said. “We’re dealing with the debt ceiling and the budget, and because our Congress hasn’t been getting along, to say the least, we don’t have a real budget, and what they are doing is called a continuing resolution, where they take last year’s budget and just try to move it forward.”

But the congressional majority does not want a budget that includes anything about the Affordable Healthcare Act, Murphy said. “If they don’t get their way, then they want to shut down the government, just like Newt Gingrich did in the 1990s,” he explained.

Murphy said he asked the representative from Ohio if he could get 20 or 25 other Republicans to support a continuing resolution, and he told Murphy he doubted that he could raise 10 votes if it had anything to do with Obamacare.

“We’re not dealing with a group or a party that is really willing to compromise,” Murphy said. “That makes it really tough, because that is what I’m trying to do, and it’s really the only way we’re going to get things passed, but at the end of the day, we will have to fight for it.”

He said there are things that need to be protected, and much that needs to get done.

“When you look at all the issues, whether it’s immigration, whether it’s healthcare, whether it’s our debt, there’s a solution for all of these, and it’s not rocket science,” he said. “There’s a lot of smart people in D.C., believe it or not, maybe not all members of Congress, but there’s a lot of brilliant ideas up there and there’s a lot of solutions, but we’re not getting to the meat of it, because so many people are so worried about their own political agenda and getting re-elected.”

Among Murphy’s concerns are getting the money out of politics and solving issues with gerrymandering. He pointed out that 82 percent of congressional districts now are predetermined either Republican or Democratic.

“You start talking to some of these Republicans who actually agree with you behind closed doors, and they will say, ‘Yeah, we need to do immigration reform, we need to have tax reform, we need to protect Social Security and Medicare,’ but they won’t say it in public, because they know that if they do they’re going to get a primary. Right now, those primaries are scaring the heck out of them,” Murphy said.

Unfortunately, Murphy said he does not see it getting better any time soon.

“I’m not that optimistic that Congress is going to solve big-picture items like immigration,” he said. “Nearly every employer in our country that I have spoken with wants immigration reform. Not only is it good for the economy, it’s a moral issue. Those 12 million undocumented workers in our country have been here. By and large, they are working really hard, and they want to be part of our community. I just hope that we get a chance to vote on it in Congress.”

Other issues such as Social Security and Medicare are also important. “Right now, I don’t think there is anything on the floor that is going to seriously affect them, thankfully,” he said. “Even the Republicans know how dangerous that would be.”

ABOVE: Congressman Patrick Murphy was the featured speaker at Monday’s meeting of the Mid-County Democratic Club.