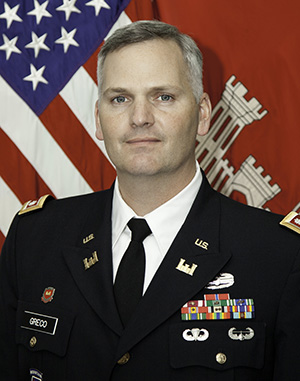 “This is a really important topic that we’re discussing tonight,” Greco said. “Water really does mean a lot here in South Florida.”

Greco, whose command covers the 16 counties in the South Florida Water Management District, said work on the dike has been ongoing to different degrees since work began in 1930. Gradually, the focus has turned to balancing protection with restoring the Everglades.

“One of the major focuses we have had in recent years is ecosystem restoration,” Greco said, explaining that the dike has provided numerous benefits to South Florida through the years.

The original levee system around Lake Okeechobee did not encompass the entire lake, and the levees were built in the 1930s to address flooding issues as a result of hurricanes in the late 1920s.

Greco explained that at the time, the engineering corps was reluctant to get into flood protection and that the dike construction focused more on maintaining the waterway dredged through the lake, using dredge material to build the levee, creating a foundation that poses challenges to the restoration underway now.

“That levee served a good purpose,” he said, “but it was not built to the standards that we have today.”

Today, the Herbert Hoover Dike is 143 miles long, encircling the entire lake. “This is one of the largest dams, at least in the Army Corps of Engineers’ inventory of dams, around the country,” he said, adding that there are numerous spillway inlets and pump stations in addition to the earthen levee.

The height ranges from 32 to 45 feet, and the average width at the top is about 20 feet and at the bottom about 250 feet.

The water level at the time he made his presentation was 15.63 feet. “The level generally does not go up to the dike itself,” Greco said, explaining that it was built originally as a levee, and the corps tries to maintain the lake level at between 12.5 and 15.5 feet. “This is a very large structure, and there is a lot of rhyme and reason as to how it was designed and how it’s operated today.”

Lake Okeechobee is part of a much larger water system, and every action must take a number of factors into account.

“Lake Okeechobee is really the liquid heart of that system,” he said. “You can move water all the way from the Kissimmee Basin down to Florida Bay through Lake Okeechobee, but the way it’s operated, and the way it was designed, has some limitations on how water can be moved in large quantities.”

Greco said past phases of levee construction have served purposes then, but created a number of vulnerabilities that must be addressed today.

One of the biggest problems is that dredging material was simply dumped onto areas with layers of muck, which leaves a weakness in the structure. Porous limestone fill in the dike that was blasted out of the lake when the canal was dug also creates problems. Greco said levees are supposed to seep, but excessive seepage can become a serious issue.

Lake levels were kept considerably higher in the 1970s and 1980s, which put stresses on the dike that it could not handle.

“Boils and pipes are water that percolates back up through the ground on the land side of the dike and sort of bubbles out,” Greco said. “That’s not a problem until you start seeing sediment taken along with it. Piping is the taking of the sediments. That’s something that became very evident, especially in the 1990s.”

Culvert deterioration also became an issue, especially along the southern portion, where some of the culverts were built in the 1930s of corrugated steel, which corroded.

Greco said the SFWMD does most of the Everglades restoration work, but that the corps has responsibility for the dike and culverts. “A tremendous amount of maintenance has been done on those structures over the years,” he said, noting that the corps spent about $11 million on maintenance over the past year.

The corps has been trying to reduce immediate hazards to surrounding communities but has also embarked on a program to reduce the risk system-wide, beginning with the southern area, which poses the most serious potential for failure.

“This is not a cheap thing to do, but we have to take fiscal realities into consideration,” he said.

They first built a cutoff wall along 21 miles of the southern section from Pahokee to Belle Glade that were most vulnerable and addressed issues with the 32 culverts around the dike. Sixteen of the culverts are under contract or complete at a cost of $20 million to $40 million each, he said.

In addition, the regulation level for the lake has been reduced to a maximum of 17.25 feet. “As the level is increased above 15 feet, so does the risk of failure of the dike,” Greco said. “”Don’t get alarmed. We’re at 15.63 feet today. Once you get up to 18 feet, the probability of failure becomes really significant, so our goal is to see that we don’t increase the probability of failure and provide any unnecessary risks.”

The corps also enacted a Herbert Hoover Dike Emergency Action Plan that outlines procedures in the event of a failure, as well as a routine inspection program. When the water level rises over 15.5 feet, the dike is inspected weekly.

“I think July was when we went above that level,” he said. “Right now, we do have two active seep sites around Lake Okeechobee. Combined, they are flowing a little less than three gallons per minute of clear water out of them. We’re keeping an eye on them. They’re not problematic right now.”

The corps has identified and prioritized the most at-risk areas of the dike and is abandoning or replacing faulty culverts.

“We began the process last February and anticipate having a report out for the public to review next summer,” he said. “This shows what the next steps are to complete the rehabilitation of the Herbert Hoover Dike and get it to a point that it does not pose an unnecessary risk to the communities surrounding the lake.”

The study will be complete in 2015, with the first contracts awarded in 2017.

There has been much discussion about releases of lake water into the coastal estuaries, he said, referring to recent criticism about releases to St. Lucie County to get the lake level down.

Water that was once released to the south through the Everglades and eventually to the Florida Bay now must go west and east due to Everglades improvement efforts, he said.

Through the years, the objectives of the entire system have shuffled between Everglades restoration and public safety.

“But when we run into an extremely wet season, like this one has been, that idea of public safety really does trump all,” Greco said.