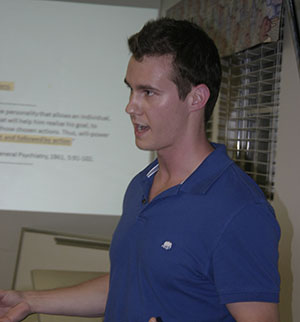 Voren is a graduate student with Scripps’ Kellogg School of Science and Technology under the guidance of Dr. Paul Kenny.

“We look at diseases such as addiction to nicotine and cocaine and probe the brain to see what’s actually going on in the brain, and then work with chemists in the department to develop drugs that can potentially treat addiction,” Voren said. “Simultaneously, while this is the study of drug addiction, this is just figuring out how all the pieces of our brain come together to form one single unit and affect our behavior.”

Habit is distinguished from willpower, which is a conscious decision that originates in the executive centers of the brain, and is planned with a goal, while a habit is an unconscious pattern of behavior.

“These two conflict because not only are they involved in entirely different neuronal processes of the brain, they both influence the way that you develop drug addiction,” Voren explained.

To study how habits are formed, the institute uses reward-based habit formation in laboratory animals. “One way of doing this is using intercranial cell stimulation,” he said.

In this procedure, researchers inserted probes into different parts of rodents’ brains and applied stimulation until they found which areas actually caused the rodents to seek that stimulation by spinning a wheel that generated an electric current.

“They found an area of the brain that made the rodents spin the wheel to the point that they would spin it for hours upon days and actually pass out from exhaustion and lack of eating,” Voren said.

Further research revealed that stimulating this area releases massive quantities of dopamine to the brain, thus causing the rewarding feeling.

Research on Parkinson’s disease patients has shown that their dopamine-producing cells die off, resulting in motor problems. “Not only that, those patients are not impulsive and generally do not engage in addictive behavior,” Voren said. “Also, their personalities are characterized as rigid, introverted and slow-tempered.”

A drug was introduced for Parkinson’s patients that reduced their introversion but had serious side effects, such as gambling, increased sexual urges and other compulsive behavior.

Dopamine-induced rewards are necessary for the body to learn what is good for it, such as food. “We get dopamine released when we taste good food,” Voren said. “It’s to promote motivation to continue that behavior.”

Other stimuli such as love, exercise and receiving money also release dopamine, he added.

In a normal situation, the dopamine synapse is released from the end of a neuron to the next cell that it is communicating to, which is tightly regulated. Cocaine, however, binds to the receptors that pull dopamine back in. “Dopamine just sits there for a while constantly driving that cell it is communicating with, and this is the reward center of the brain,” Voren said.

Nicotine causes dopamine-producing cells to release more dopamine than usual, as well as other effects that are independent from dopamine, he said.

People who chronically expose themselves to addictive drugs do not return to their bodies’ normal dopamine levels when the drug wears off, because the drug has hijacked the dopamine system in the brain, fooling the body into thinking it is producing enough dopamine and reducing the amount that is normally released, which results in drug withdrawal.

Current research has been developed to the level that they are finding drugs that will block the reward level of the drug they wish to control, thus reducing addictive behavior by inhibiting or replicating the effects of addictive drugs such as nicotine, which is Voren’s primary area of research.

Nicotine is one of the most highly addictive drugs, he said, explaining that based on statistics from the 1990s, 75 percent of people in a survey had used tobacco, and 24 percent were dependent. “That’s way more than any other drug,” he said.