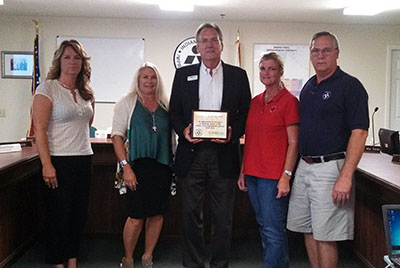 The Indian Trail Improvement District Board of Supervisors last week decided to seek bids from electrical contractors rather than continue a piggyback contract it has maintained for many years.

Staff explained that the contracts cover occasions throughout the year when the district needs a licensed electrical company to repair or upgrade various systems. The company needs to have sufficient experience, knowledge, manpower and equipment to make swift repairs to all components, from telemetry/pump equipment to ball field lighting.

“C.R. Dunn, if you include the $120,000 proposal they have submitted, is billing $348,000 over the last two fiscal years,” Ballweg said. “This is very significant, and I don’t believe it’s appropriate for a piggyback contract. I believe it should be broken up and put out to bid.”

“The piggyback was a five-year contract with one year renewable. That expired in 2012,” Erickson said. “They did not go out for another contract on that. I think that smells, and I think that’s not the way government should work. I don’t believe a piggyback is in the best interest of the district on this. Electrical contracting has never gone out to bid out here. It has been the same people here for 20 years. Sometimes it’s just time to sharpen your pencil.”

“We only use piggyback contracts that are the low bidder,” Massarda said. “It doesn’t mean that price would be more than what you could get by sharpening your pencil. Sometimes you have a lower price from some vendors. However, you can have problems with specifications, applications, service to the district, and these are things that the board needs to consider.”

Interim District Administrator Jim Shallman said he believed ITID could save time and money by utilizing contracts that have been bid by other organizations such as Palm Beach County and the Palm Beach County School District.

ITID Vice President Carol Jacobs made a motion to extend the electrical contracts 90 days and then seek bids, which carried 4-0 with Supervisor Gary Dunkley absent.

In other business, the board gave Engenuity Group a certificate of appreciation for its service as consulting engineer for the past four years. Engenuity’s contract expired Sept. 30.

“On behalf of Engenuity Group, I would like to thank the Indian Trail Improvement District Board of Supervisors,” engineer Keith Jackson said. “I know the members of my firm have truly enjoyed working here and serving at your request.”

On another matter, resident Patricia Curry questioned why the Hamlin House parking lot at the Nicole Hornstein Equestrian Park was going to have 10 lights when the ITID office parking lot had only two. “Parks are supposed to close at sundown, and I don’t know why we are getting 10 lights,” she said.

Parks Director Tim Wojnar said he believed it might be because of the date that the ITID office was granted its certificate of occupancy, which was in the late 1980s. “Codes are different now than they were in the late ’80s,” Wojnar said.