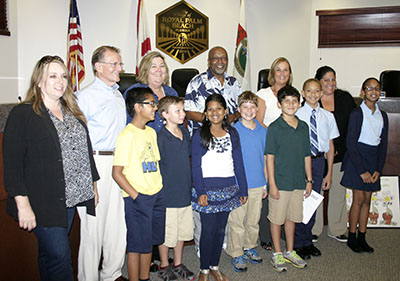 The Royal Palm Beach Education Advisory Board heard a presentation Monday by H.L. Johnson Elementary School’s Southeastern Consortium for Minorities in Engineering (SECME) club, which is preparing for upcoming competitions.

Jenny Birney, who has been H.L. Johnson’s SECME sponsor for 19 years, said the club, made up of fourth and fifth graders, has won numerous awards.

The club participates in all nine of the district Olympiad events, and encourages participants to engage in activities they would not ordinarily participate in, such as getting boys to participate in art and poetry, and getting girls to engage in science and engineering. Birney noted that a boy from H.L. Johnson had won a poetry competition the previous year.

Fifth grader Nikita Tanguturi said SECME, which is based on science, technology, engineering and mathematics (STEM), was established in 1975 to get more kids to take an interest in engineering.

“SECME wants more females involved in its subjects,” Tanguturi said. “Even today, our SECME club has only eight girls. We need more girls to take an interest in STEM, so when we grow up, there will be a lot of people to work in jobs that involve STEM subjects.”

First-year SECME member Lorraine Urquhart said 145 applications were passed out but only 40 of them can be accepted.

Birney explained that many of the applicants did not write a required essay about the upcoming STEM competitions, which include building a water-powered rocket, a balsa-wood bridge or a vehicle powered by a mouse-trap spring.

“I was looking for commitment on their part because we do have to write the essay,” Birney said. “Without the essay, we don’t get to compete, so it’s a crucial part to the competition.”

ABOVE: SECME students with Education Advisory Board members.