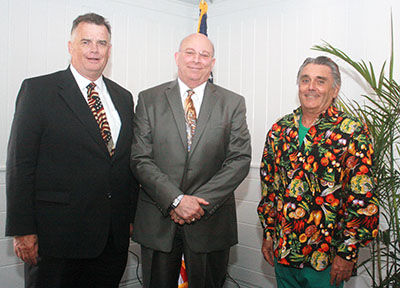 Members of the Wellington Chamber of Commerce got an update from Mayor Bob Margolis during the annual “State of the Village” luncheon Monday.

During the event, sponsored by the Wellington Green Market and held at the Wanderers Club, Margolis said that things are looking up in Wellington.

The village has maintained a $74.46 million budget — the same as last year — with an unchanged tax rate. Despite this, Wellington has increased its level of services.

“I cannot compliment staff enough for what they do,” Margolis said. “They gave us a budget this year that is absolutely unchanged, but we have some new things that we think you will be excited about.”

“Without raising the budget, we have added PBSO staff — a deputy sergeant, a detective and a deputy,” Margolis said. “That’s not to say that we need them, but to say that public safety and quality of life issues are certainly the most important for me as your mayor and a resident. To be able to allocate some funds without raising taxes that will go a long way to keeping people safe is important.”

“Years ago, Wellington gave funding to our schools,” Margolis said. “But due to the economy, previous councils had some difficult decisions to make and had to stop funding it. This council saw the opportunity for additional funding. It will be up to the schools to decide how to spend the money.”

“This money will be for our schools to use in the best possible way,” he said. “Our kids are the most important thing. I’m glad we could bring this back.”

Margolis said the good news is that property values are up in Wellington and the real estate market has picked up.

“It seems to me we are coming out of a bad economy,” he said. “People are telling me when they put their homes up for sale, they sell in four days. That’s amazing.”

But Wellington still has areas that need improvement. Margolis pointed to the village’s transitional neighborhoods, which is one area of focus.

“We seem to have some issues there,” he said. “But previous councils started the Safe Neighborhoods Program. Our staff is doing a phenomenal job with this.”

The village has helped start neighborhood watch groups, as well as taken other measures to help the communities.

“All it takes is one home in foreclosure for there to be an opportunity to have problems,” Margolis said. “This initiative is great, and they’re doing a great job.”

Another challenge Wellington has faced is drainage. Margolis noted that Tropical Storm Isaac highlighted some changes that needed to be made to the village’s drainage system. “We got 18 inches of rain,” he said. “That was a 100-year-storm.”

Margolis said that in the future, Wellington will be looking to improve drainage.

This has been further complicated, he said, by the newly drawn Federal Emergency Management Agency maps that put much of the western communities in a flood zone.

“This is a really big issue,” Margolis said, noting that it would require residents to pay for flood insurance. “We’re staying on top of this.”

Deputy Village Manager John Bonde, who has been monitoring the issue, noted that there will be three public meetings to discuss the matter.

Additionally, Margolis said, Wellington is working with legislators and FEMA staff to fight the new designation.