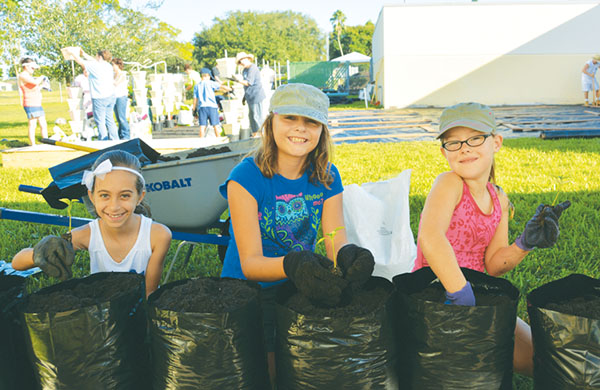 Last week, the community came together to transform a beautiful garden at Elbridge Gale Elementary School into a top-of-the-line green space complete with hydroponic and aquaponic systems, garden beds, rain barrels and more. The goal is to teach children numerous lessons and make the school more environmentally friendly.

On Saturday, Sept. 28, volunteers, school leaders, parents and children came together to celebrate the Green Apple Day of Service with a project that will hopefully earn Elbridge Gale the Green School of Excellence designation.

The event was made possible in part by the Wellington Preservation Coalition, which donated money for the aquaponics system and materials.

Wellington Preservation Coalition Executive Director Tom Wenham approached Elbridge Gale with the idea, which arose out of an encounter at the 2013 Florida Green, Energy & Climate Conference.

There, he met with Wellington Projects Manager Mike O’Dell, who was looking for a school garden to use as a test model for a new soil project, and Wenham immediately thought of Elbridge Gale.

Wenham met with Elbridge Gale Principal Gail Pasterczyk to get the ball rolling.

For Pasterczyk, a garden project was on the top of her list for the school.

“We had some gardens in disrepair,” she said. “It was a match made in heaven. Unbeknownst to Tom, this was one of the plans we had for the school. But we had limited funds.”

After many meetings, it was decided the garden revitalization would be set for the national Green Apple Day of Service. It was also an opportunity to propel Elbridge Gale to consideration as a Green School of Excellence.

“We’ve been a Green School of Quality,” Pasterczyk said. “In order to jump to the next level, you need a project that the community can get involved with.”

And this project truly brought out the entire community, from representatives of the Village of Wellington, Palm Beach County and the Wellington Garden Club to parents, teachers, students and business leaders.

Students have put their own personal touches on the project, decorating birdhouses and rain barrels that will provide sustainability for the garden, using reclaimed water and attracting wildlife.

“They’re so excited about this project,” fifth-grade science teacher Sheila Galera said. “Since the aquaponics system has been installed, it has been impossible to keep them in the classroom.”

Arthur Kirstein IV, the agricultural economics development coordinator, is a 34-year Wellington resident who wanted to get involved when he heard about the project.

“I work with 24 other schools growing seedlings for their gardens,” he said. “I wanted to work with Tom because we share the same love of this community. It’s a great project for community involvement and to get kids involved.”

In addition to financing the building materials, the Wellington Preservation Coalition donated $2,300 for an aquaponics gardening system.

A blend of aquaculture with a traditional hydroponic system, the aquaponics system is its own mini-ecosystem. Herbs and other plants grow in soil above a tank of fish. Water from the tank is used to hydrate the plants and is then pumped back into the tank. The fish remove all the nitrates from the water so it can be reused.

“We thought it would get kids excited about this,” Wenham said. “The kids love looking at the fish, and it helps them learn about it.”

Galera said the lessons learned from the new gardens will be numerous.

“There’s so much we can teach,” she said, “from animal and plant life cycles to the conversion of nitrates and nitrites. The children will be able to actively understand what they’re reading in their textbooks.”

The students will be able to monitor as the fish grow, as well as the plants both in the aquaponics system and elsewhere in the gardens.

When all the plants have grown, kids will get to taste the fruits — well, vegetables — of their labor. “The Jacobs family has agreed to send their personal chef to prepare food for the students,” Wenham said.

The vegetables will then be sold to parents and staff, and at the Wellington Green Market, to raise money for the school.

Pasterczyk said this was made possible thanks to all the sponsors, especially Wenham and the Wellington Preservation Coalition, and also because of her dedicated staff.

“They have been on board 100 percent,” she said. “They have committed themselves to coming out during weekends to feed the fish and water the seedlings. They have a plan for the summer. We couldn’t do this without them.”

Wenham said that is the kind of dedication that made him want to work with Elbridge Gale.

“They have such a strong commitment to their students and our community,” he said. “We’d love to see this be a model for other schools, but it takes a lot of work, and they’re going to have to show they are as dedicated.”