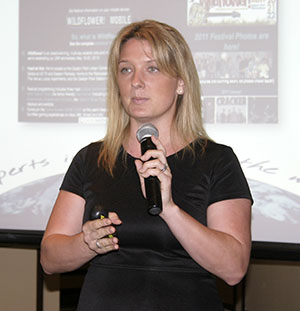 Terra Spero, CEO of RealTime Marketing Group in Delray Beach, explained to Central Palm Beach County Chamber of Commerce members Monday how to use social media to improve their businesses.

Spero, whose accounts include the Delray Beach Garlic Festival, has been a social media and mobile marketing advocate for a wide range of businesses for the past four years, helping them transition from traditional marketing to a different marketing approach, including social and mobile strategies, and reaching customers through online marketing.

Spero said web sites are evolving rapidly but are based on a more traditional form of marketing.

“If we really rewind history, we go back to the days when there were farmers in town, and you would purchase the hay or feed that you needed from a person who you knew, a person recommended to you or a person who had sold it to your great-grandfather, and these were the relationships that you had,” Spero said.

Eventually, television and other media arrived, and those traditional relationships eroded.

“We worried more about what we need to do to get somebody’s attention,” she said. “People feel like they’re bombarded with information. You drive down I-95 and you have not just a billboard, but a flashing billboard that shoots 10 different messages to you.”

Television and the Internet send advertisements that are tailored to the programs people are watching. Web sites tend to focus more on specific information people are seeking.

“Things have become easier because now we’re able to track behavior,” Spero said. “If your web site is created to give as much information as possible, then you’re really not following your customers. You’re not really asking the right question: What do my customers really care about?”

The key is to make that information as easy to get to as possible. “Once you have a site that really answers your customers’ questions, then you can determine what you should do on social media,” she said.

Spero said that a year ago, she was caught saying that Instagram was worthless. “Instagram is no longer worthless; it’s perfect for the audience that’s 13 to 22,” she explained. “Guess what? That 13- to 22-year-old audience is going to be purchasing in about another five years, things that you want them to buy.”

Looking at herself as a consumer, Spero uses pictures on her web sites to make her laugh.

“It’s constantly finding completely inappropriate e-cards that I can share with people,” she said, explaining that getting people to like your site is the first way to get their attention.

Spero added that she uses Yelp to get reviews for different businesses. Although negative reviews are buried on the site, a business that is on Yelp must monitor the page for content.

“If you’re going to send people to Yelp, be sure that you pay attention to what is being said there,” she said.

“I’m on Twitter because I have an addiction to a show called Revenge and my husband doesn’t want to hear about it, so I go onto Twitter, and I’m constantly engaging with people. It’s almost like a Revenge support group,” she said.

She also uses Twitter for news because she can find out about something she’s interested in immediately. “If there is breaking news, I’m constantly on Twitter,” Spero said.

The other reason she is on Twitter is instant communication. She displayed a picture of her 5-year-old son, Jack, obviously angry, standing in an airport.

“We were traveling to New York about a year ago for Christmas, and we got to the airport, and the flight that was supposed to be on time was not on time. Our 7 o’clock flight was delayed to 10 o’clock, and it was delayed two more hours, so we ended up leaving just before midnight,” she recalled. “We got to New York, and there is Jack standing there, and he is ticked off. As he is standing there, I’m going, ‘Hold on, sweetheart, let Mommy take your picture, click.’ I take his picture and Tweet it off to Jet Blue, ‘Thank you so much for an incredible flight,’ turn off my phone, get to the hotel, wake up the next morning, turn on my Twitter account and there is a response. ‘Ms. Spero, we are so sorry for the delay. There are now $50 credits in each of your accounts.’ What great customer service. What an amazing ability to turn around a really ticked-off customer.”

Spero was at a conference later in Las Vegas where she happened to meet the person who runs the Jet Blue Twitter account. She asked, “How the heck did you know that I was so ticked off?” He explained that they follow what is being said, and when they have a plane that is late, they have a team that waits for any conversations for two hours after the flight lands.

“It doesn’t matter that I’m saying something completely sarcastic, they are actually paying attention to every single one of the tweets,” she said. “What that means is that Twitter has become an amazing customer service tool.”