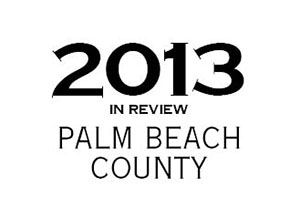 During a busy 2013, the Palm Beach County Commission advanced development applications for several sites in the western communities that could bring thousands of additional homes, and also made strides toward improving traffic flow and drainage in and around The Acreage and Royal Palm Beach. Meanwhile, four candidates lined up to compete for the seat County Commissioner Jess Santamaria will vacate next year.

In December 2012, the commissioners established a policy condemning the denial of lawful wages to an employee and established a procedure for employees to recover back wages through a program administered by Legal Aid.

Members of People Engaged in Active Community Efforts (PEACE), who had lobbied more than a year for a wage theft ordinance, said the resolution fell short of what they advocated.

The Legal Aid program will cover the salary and benefits of a staff attorney assigned to the program, along with the support services, investigative needs, court processing and other costs. The program and its funding will be re-evaluated next year.

The commissioners, sitting as the Solid Waste Authority Governing Board, gave initial approval June 12 to the SWA’s 2014 budget, which significantly reduces trash collection rates for residents in The Acreage.

The budget passed with a $1 increase in the single-family tipping rate to enhance the storm recovery reserve.

The commissioners denied postponement July 24 of a request for transmittal of a land-use change from rural residential to low-intensity commercial for property at the southeast corner of Northlake and Coconut boulevards, which doomed the proposal and heeded the contention of Acreage leaders that the postponement was only a stall tactic.

The developer had asked to push the heavily opposed development to a January 2014 transmittal hearing. The owner proposed a multiple-use planned development with commercial uses up to 49,005 square feet, including a gas station. However, many letters opposing the development were received from Acreage residents, the Indian Trail Improvement District and the Acreage Landowners’ Association. County staff also recommended denial.

In June, the commissioners approved the purchase of 24 parcels of land on 60th Street North along the M Canal in The Acreage in preparation for paving the road to connect the State Road 7 extension to Royal Palm Beach Blvd.

The link will enable SR 7 pass-through traffic to make the connection on the three-lane 60th Street North link, rather than Persimmon and Orange Grove boulevards, which were intended to serve primarily local Acreage traffic. Adoption of the resolutions initiated eminent domain proceedings on the 24 parcels, which have a total appraised value of $137,000.

The project includes replacing the Royal Palm Beach Blvd. bridge over the M Canal and reconstructing the intersection with 60th Street North. A signal will also be installed at the intersection. The 60th Street connection will provide major relief to the residential streets that have had to bear the burden of traffic that has been using the SR 7 extension.

The commissioners agreed Aug. 13 to cover a $687,000 shortfall for the Office of the Inspector General, a move made necessary partially by a lawsuit from several municipalities, which have disputed the office’s financing method. The proposed budget for the office is $3.7 million, which includes 40 positions, 23 of which are filled.

Without the additional county money, Inspector General Sheryl Steckler said she would need to lay off employees.

Meanwhile, 2014 will bring big changes to the Office of the Inspector General, after Steckler announced her decision in October not the seek reappointment when her current contract ends in June 2014.

The commissioners approved amendments to its unified land development code on Aug. 22 that included stricter control on livestock waste after years of complaints that some landowners were stockpiling large amounts, creating health and water pollution hazards. Many residents in more rural areas use wells for potable water.

Several municipalities, such as Wellington and Loxahatchee Groves, already have rules in place regulating livestock waste.

Planning, Zoning & Building Executive Director Rebecca Caldwell said bona fide agricultural uses still will be exempted from the ordinance. Caldwell said the county was only proposing to regulate the receipt of horse manure, with required receiving permits that would be good for three years, and did not propose hauling permits.

The November 2014 race to replace term-limited County Commissioner Jess Santamaria got off to an early start in 2013 as four candidates emerged to run.

The candidates include former Wellington Mayor Kathy Foster, Royal Palm Beach Councilman Fred Pinto and Melissa McKinlay, who works in the Palm Beach County Legislative Affairs Department. They will run in the Democratic primary. Andrew Schaller, who ran unsuccessfully for the post in 2010, is running as a Republican. County Commission District 6 trends Democratic.

Former Royal Palm Beach Councilwoman Martha Webster, a Democrat, initially planned a run, but withdrew from the race and threw her support behind Foster.

The Palm Beach State College Board of Trustees voted Oct. 8 to spend up to $4 million for architectural design, infrastructure and site work on the college’s long-planned fifth campus in Loxahatchee Groves.

Infrastructure improvements will include paving B Road, the cost of which will be shared with developers of a planned commercial site nearby.

The college’s board previously authorized $4.5 million in August 2011 to purchase 75 acres of the property for the campus and finalized the purchase in October 2012. The decision to finance construction puts PBSC closer to its goal of providing more convenient access to educational services for residents in Loxahatchee Groves, Royal Palm Beach, Wellington and The Acreage.

The commission voted 6-1 in October to approve up to 2,000 homes on the 1,209-acre Highland Dunes land within the Palm Beach Aggregates property, 2.5 miles west of Seminole Pratt Whitney Road.

About 20 residents from surrounding neighborhoods opposed the development at a county zoning meeting, saying it would complicate transportation and drainage, and compromise their rural way of life. Commissioner Jess Santamaria cast the only “no” vote.

The action returned Highland Dunes to the same zoning it had five years ago, which was abandoned when the residential home market collapsed. The developers’ application asked for rezoning from a residential transitional zoning district to a planned unit development district for 2,000 units at about 1.65 units per acre.

The site had been rezoned in 2008 from the PUD to the RT to allow agricultural uses during the housing downturn, which saved the property owner about $1 million per year in property taxes.

County staff recommended approval of the request, explaining that the state now allows an unlimited number of large-scale amendment rounds to be processed each year. Planning Director Lorenzo Aghemo said the approval would give staff more time to review the proposed amendment.

Residential developer Minto recently purchased the 3,800-acre Callery-Judge Grove property for $51 million. The land, off Seminole Pratt Whitney Road, has a future land-use approval for up to 2,996 dwelling units and up to 235,000 square feet of non-residential uses.

Minto requested an additional amendment round to allow for the other components of their development proposal, which asks for up to 6,500 homes and about 1.4 million square feet of workplace and community-serving commercial uses.

The commissioners approved the sale of the Mecca Farms property to the South Florida Water Management District in October, ending a decade of frustration that began when the county had purchased the property for the Scripps Research Institute, only to be stuck with it when Scripps ended up building at a site in Jupiter.

The county sold the nearly 2,000-acre former agricultural land to the SFWMD for $26 million.

The county had invested more than $150 million into the land, including $60 million to buy it. The SFWMD plans to build a water storage and treatment area there that will help restore flow to the Loxahatchee River.

The decision to change the title was controversial, but Abrams said he thought the moniker had expanded his role in the county and statewide. Abrams had argued that the title “commission chairman” raised confusion as to his status, since the positions in Broward and Miami-Dade counties are called “mayor.”