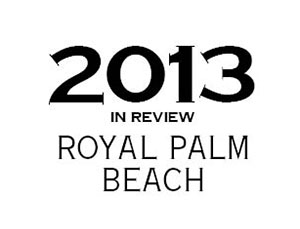 The Village of Royal Palm Beach basked in the fruits of its labor in 2013, taking time to enjoy its large new park, while crafting a vision for the village’s future.

At long last, Royal Palm Beach Commons Park opened, playing host to several community events, including a new green market. The village continued to expand its recreational options, planning and opening a skate park at the request of young residents, and starting discussion on adding a dog park and a flying disc park at Commons Park.

A March election saw a veteran council member return to the dais, ousting an incumbent and changing the makeup of the board. After not having a candidates’ debate before the 2013 election, council members took action to make sure one will happen in 2014.

Royal Palm Beach also saw progress on highly anticipated projects, including a groundbreaking on the Aldi distribution center and the opening of the Renaissance Charter School at Palms West.

Council members, along with residents, began crafting a more concrete future for the village with a visioning workshop that will help shape Royal Palm’s future policies. After much debate, council members finally settled on a residential designation for its former wastewater treatment plant site, settling residents’ concerns about the site being used for commercial space.

After Temple Beth Zion merged with another temple, leaving its building vacant, council members considered buying the property. Ultimately, council members decided against it, but by year’s end, a new Jewish congregation had made its home in the building.

The village also took another look at its garage sale rules, while dealing with complaints from residents about weeds in local canals.

Delays on the village’s new signature park dominated the headlines in 2012, causing frustration for residents and council members alike. But Royal Palm Beach finally got to enjoy its new space after the park opened on March 2. The entire community — more than 50,000 people — came together March 22 through March 24 for a grand opening weekend bash, kicking off a year of community events coming to the park.

In the fall, the village announced that the new Royal Palm Beach Green Market & Bazaar would make its home at Commons Park, offering fresh produce, handmade goods and more. The market launched Oct. 20 and has been open each Sunday since, offering a popular new event for residents.

Though Royal Palm Beach has enjoyed its new facility, plans began forming in 2013 to expand the park further. In the summer, discussion of adding a flying disc course to the park began. In July, council members gave priority to a dog park over the flying disc course, shifting budgeted money toward the project. But then disc golf fans showed up to push for their project.

Council members assured residents that both projects would be included in the park, but noted that the dog park had to be bigger than originally planned. In December, residents had a chance to provide input on the dog park, offering suggestions for the 4.15-acre site.

At the behest of local skateboarders, council members approved the creation of a skate park near the Royal Palm Beach Recreational Center at an underused roller hockey rink. Early in the year, skaters got the chance to help design the park with the equipment they’d like to see. The park opened in the fall, with skaters able to use the site freely if they registered or had a parent register with the village. The $100,000 project allows skaters to enjoy their hobby without bothering local shopping plazas.

Councilman Fred Pinto and Councilwoman Martha Webster were challenged in the March 2013 election. Webster saw a challenger in former Councilman David Swift, who served more than 20 years on the council before stepping down two years ago. Meanwhile, Pinto faced a challenge from teacher Justin Sallenbach. When the votes were cast on March 12, Swift unseated Webster with more than 62 percent of the vote, while Pinto retained his seat, taking more than 66 percent of the vote.

Already, the 2014 election has kicked off with Mayor Matty Mattioli facing a challenge from community activist Felicia Matula, who lost to Mattioli in 2012.

In 2013, no candidate forum was held, and council members sought to find an independent organization to host the forums in the future. Council members debated allowing the Central Palm Beach County Chamber of Commerce, the League of Women Voters and the Town-Crier newspaper to host the event, ultimately settling on the Town-Crier to run the 2014 forum.

The village saw advancement and, in some cases, completion on some long-awaited projects. In September, the Aldi grocery chain broke ground on its planned distribution center on State Road 7. The site is expected to be developed and opened next year, providing much-needed employment opportunities.

In August, the Renaissance Charter School at Palms West opened its doors to students after setbacks prevented the school from being completed in 2012. The school opened on Aug. 19 with more than 800 students in its first year. The school took over the site of the old Albertsons supermarket on Southern Blvd.

In January, council members announced they would seek resident input on the village’s strategic plan discussed in 2012. The plan lays out Royal Palm Beach’s goals for the next five, 10 and 15 years. In April, more than 40 residents participated in the workshop and were able to provide input for the future of their community.

In April, council members also came to a decision on a use for the former wastewater treatment plant site at the village’s north end, quelling residents’ concerns. Decisions on what to do with the site — which prompted formation of a task force in 2011 — plagued the village for years, with residents pushing for little to no commercial uses on the site. At an April 18 meeting, council members decided to change the 150-acre site to low-intensity, single-family residential use.

In February, leaders of Temple Beth Zion announced that the Jewish congregation would be merging with Temple Beth El in West Palm Beach after 32 years in Royal Palm Beach. The decision prompted much discussion about what to do with the temple building, which is adjacent to Royal Palm Beach Village Hall.

At a meeting March 7, council members were divided on a decision to pay $1,500 for an appraisal of the property. But in April, after the cost of an appraisal came back higher than expected, the council voted to abandon plans to acquire the property.

The site found new owners in the fall, when Chabad of Royal Palm Beach purchased the site, moving its fledgling congregation from an office suite where it had been operating for several years.

At the request of residents, Royal Palm Beach loosened some of its restrictions on yard sales early in 2013. At a Jan. 17 meeting, council members agreed to allow four yard sales a year (one per quarter), allow a maximum of four signs and allow posting of the sales on the village web site. The request was made in 2012 by a resident looking to loosen the regulations.

Royal Palm Beach had to deal with complaints from residents in the summer of 2013 about weeds proliferating in local canals. Though a village’s contractor had put herbicide in the canals to combat weeds, the dying plants made the canals impassable.