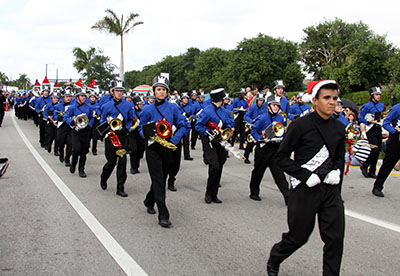 “An Old Fashioned Holiday” is the theme of this year’s Wellington Holiday Parade — a fitting theme to mark the 30th anniversary of the event presented by the Central Palm Beach County Chamber of Commerce.

The parade is set for Sunday, Dec. 8, but in a break with tradition, it will roll down Forest Hill Blvd. a bit later, at 2:30 p.m. — enabling spectators to go directly to the festivities in Holiday Park at the Wellington Amphitheater after the parade has passed.

The Wellington Preservation Coalition has once again signed on as presenting sponsor, along with the Schumacher Family of Dealerships.

“We’re especially proud to be a part of this 30th anniversary of the holiday parade,” Wellington Preservation Coalition Executive Director Tom Wenham said. “The parade is one of Wellington’s longstanding traditions that brings us together as a community. And we’re excited that everyone will have a chance to make a day of it by heading directly to the Holiday Park after the parade.”

The parade is expected to attract a record crowd of more than 20,000. The annual event includes more than 100 entries of floats, marching bands, civic groups, community businesses and dignitaries. Wenham, Saltalamacchia and other dignitaries will ride in the parade in cars provided by the Schumacher Family of Dealerships.

“Santa will get off his sleigh and go directly into Holiday Park at the Wellington Town Center,” she said. “Thanks to Wellington Preservation Coalition, we’ll continue the tradition of a family day in Holiday Park.”

Holiday Park is open from 1 to 6 p.m. It includes bounce houses, exhibit booths, food and after the parade, Santa, who will be hearing children’s Christmas wishes. Students from Wellington will perform a holiday concert. At dusk, Wellington Mayor Bob Margolis will light the Christmas tree.

The Holiday Mile Run/Walk, which starts at the amphitheater, will begin at 2:15 p.m. A portion of the proceeds from the day’s events supports the chamber’s annual scholarship program.

For 30 years, the parade has rolled under the leadership of longtime chamber member and Parade Chairman Dennis Witkowski.

“The parade was the chamber’s first signature event,” Bedford said. “Each year, we partner with Wellington. They do so much. It’s a real collaborative effort. And, of course, we’re honored to have Dennis Witkowski still at the helm of this event on the 30th anniversary. There’s a real love of tradition with this parade. Many of the committee members and entries are people who have been doing this since the beginning. Dennis got a great crew together from the very beginning, and we couldn’t do it without them.”