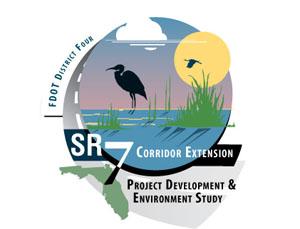 The Royal Palm Beach Village Council pledged $5,000 to the Western Communities Council on Dec. 19 to help pay for a national lobbyist to support the State Road 7 extension to Northlake Blvd.

Councilman David Swift told council members that he attended the Western Communities Council meeting Dec. 10 in Loxahatchee Groves, where several of the communities had pledged their support and sought backing from other members to fight a lobbying effort by the City of West Palm Beach.

West Palm Beach has been protesting the SR 7 extension, specifically with Washington elected officials, and was able to get letters from U.S. Rep. Lois Frankel (D-District 22) and U.S. Rep. Alcee Hastings (D-District 20) noting environmental concerns that had been raised by West Palm Beach.

The Western Communities Council is made up of elected officials from each of the western communities designed to provide a coordinated response to regional issues.

Swift said Loxahatchee Groves Councilman Jim Rockett had made a motion for each member community to come up with $5,000 each to retain a Washington lobbyist to tout the benefits of the SR 7 extension.

“I would rather have brought that to you with a scope of work,” Swift said. “Unfortunately, those folks are a couple of meetings ahead of us on this. I did vote in the affirmative that Royal Palm Beach would do that, basically on the idea that Loxahatchee Groves is about 10 times smaller than us and they came up with $5,000. I figured we might be able to do that.”

“I’ll bring that back to the council,” Swift said, asking members to agree to participate.

Village Manager Ray Liggins said $5,000 for a lobbyist is not currently in the budget, and that he would need the council’s direction to move forward with the necessary budget amendment.

Councilman Fred Pinto said he would participate only if the council has a clear vision of what the lobbyist is expected to accomplish.

“The State Road 7 initiative, which has been going on forever, is really at a point where it has become [a Florida Department of Transportation] project initiative,” he said. “What has happened is the situation has become recharged politically by our neighbors in West Palm Beach.”

Pinto scoffed at the environmental concerns noted by West Palm Beach, pointing out that the FDOT has done thousands of projects and gone through the necessary environmental mitigation process when necessary.

“If they are real issues, they need to be addressed, but I just want to point out a few realities of history,” Pinto said. “Andros Isle and River Walk would not exist today had there not been an agreement that West Palm Beach entered into to have those developments built along that same waterway that they now claim [would be damaged] by extending State Road 7.”

Pinto added that the project will serve the critical transportation needs of nearly 500,000 people and that West Palm Beach’s existing Okeechobee Blvd. communities only exist because of plans for the promised SR 7 extension.

“It was OK when they wanted to build those developments,” Pinto said. “Now they want to reverse what they agreed to previously, and now they are using the rationale of environmental impact, which, if they are real issues, they should be mitigated. We have to think of the good of the many and not just the wishes of a few.”

Pinto said he was frustrated that the western communities still must spend money to support the road.

He said he would support the Western Communities Council plan only if Royal Palm Beach gets to sign off on it.

Vice Mayor Jeff Hmara asked Swift whether the regional organization had expressed any specific expectations of a lobbyist, and Swift said the group is trying to figure what the best approach would be, but were concerned about misinformation that might have been distributed to elected officials.

“We think [U.S. Rep.] Ted Deutch, for example, was presented misinformation,” he said. “We’d like to provide the right information for him.”

Swift said they would also like to get state elected officials to write in support of SR 7.

“I do feel very similar to the way Fred feels about this,” he said. “I would rather have had a scope of work. Personally, I feel that this can move forward,” he said, explaining that he planned to meet with Liggins and other stakeholding entities to agree on a scope of work. “I think we can come up with something that will work.”

Councilman Richard Valuntas said he would support participation as long as the other three communities did, and trusted Swift to represent the village in discussions. Valuntas made a motion to approve the $5,000, which carried 5-0.