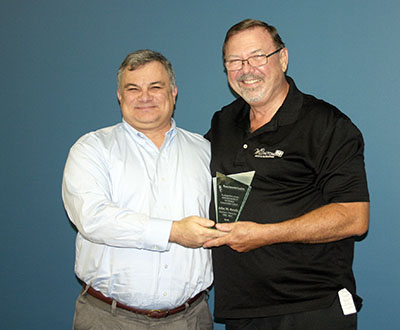 Bonde is retiring as Wellington’s deputy manager, which also means he will be retiring from his position with the Western Communities Council, a panel made up of officials from western-area governments designed to coordinate local response to regional issues.

With the appointment, the board also changed Quickel’s title from secretary/treasurer to administrator.

Quickel and Bonde share similar backgrounds. Both left the Indian Trail Improvement District as administrators to work for the Village of Wellington.

Bonde said that the roles of Western Communities Council secretary and treasurer traditionally have been combined, and vested not with an elected official, but a municipal staff member.

“They are not voting members of the board,” Bonde explained. “They are your staff. That’s the way it has been interpreted.”

Bonde added that the hosting governmental entity provides the recording secretary, and the Western Communities Council secretary coordinates the minutes, makes sure they were taken and puts them into form. Bonde has also kept custody of records, given notice of meetings and conducted correspondence.

As treasurer, Bonde has kept track of all funds, which currently total a little over $10,000.

Wellington Village Manager Paul Schofield said Bonde’s function has been more than that of a traditional secretary/treasurer.

“Mr. Bonde has been our secretary for a number of years and has not, in fact, been functioning as a secretary,” Schofield said. “He has been functioning as the council’s administrator. We expect more of him than you would normally expect. He has a larger hand in formulating policy than you would normally expect out of a board secretary. That is something we need to discuss. Are you looking for a board secretary or a council administrator?”

Bonde said the Western Communities Council is not normally a time-consuming organization, but there are periods when it gets active, citing the current State Road 7 issue as an example.

“There has been some heightened activity, and it becomes a little bit more difficult to conduct all the things that are expected during those periods,” Bonde said.

Bonde explained that Schoech as secretary/treasurer was largely giving legal advice. “His approach to secretary was minutes and legal,” Bonde said. “Mine has been more administrative.”

“If the Village of Royal Palm Beach were going to fill his shoes, we don’t have someone,” Swift said. “Does Wellington?”

“Those are the people who have done the work,” Bonde said. “I have been hiding behind some very qualified and talented people. They make me look a lot better than I really am.”

Bonde said he has worked with Aldrich for seven years. “She has been everything behind the scenes for this and many other organizations, including the Florida Association of Special Districts and other groups that I have been committed to,” Bonde said, explaining that Aldrich has been working on her own time to support the Western Communities Council and other responsibilities that Bonde has a role in.

“I believe that she will continue to do that, with the manager’s permission, for whoever is the next secretary,” Bonde said.

He said Quickel had been hired recently as Wellington’s chief financial officer.

“She came by way of Indian Trail, and now she’s a member of Wellington staff,” Bonde said. “I’ve worked with Tanya before in another agency, and I’m very glad that she’s here.”

He also introduced Kim Hutchison, another Wellington staff member who came from ITID, where she was Quickel’s administrative assistant.

“She’s here tonight to provide support in expanding her role here with the Village of Wellington,” Bonde said. “These are very dedicated people. I’m retiring, as you know. I’m trying to set this up to put you all in some good hands.”

“This is an opportunity to serve your community in a volunteer capacity that we all look forward to,” Schofield said.

Schofield made a motion to appoint Quickel as secretary/treasurer and change her title to Western Communities Council administrator. The motion carried unanimously.

ABOVE: Western Communities Council President Howard Coates thanks John Bonde for his service to the organization.