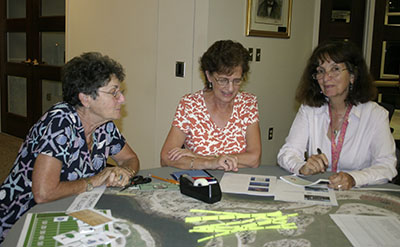 A handful of residents attended a workshop Tuesday to discuss plans for a large-scale dog park at Royal Palm Beach Commons Park.

Marsh explained the materials provided for the workshop, which included 90,000 “dog dollars” that the village has allotted for development of the 4.15-acre park.

Also provided were giant maps at each table for participants to do their planning; pipe cleaner fences; a gauge to measure distances on the maps; and symbols depicting benches, tables, pavilions and landscaping.

Marsh did a PowerPoint presentation on how the session would be conducted, including examples of existing dog parks in the village and the surrounding area.

“They are spread evenly throughout the village, and if you look at the newest addition, which will be the Royal Palm Beach Commons Dog Park, geographically it makes sense as the fourth addition,” Marsh said.

“Many of you have visited these parks, and it will give you an idea of how to lay this park out,” Marsh said.

The master plan for Commons Park was amended earlier this year to include a dog park and a community garden.

“We will take the concepts from this evening’s meeting and present them to the council for site plan approval at either the last meeting in January or the first meeting in February,” he said. “After staff knows what we’re doing, it will take six to eight months to design and advertise the project, and an additional four to six months to construct it.”

The nine residents were divided into three groups to formulate ideas for the park.

“Each group gets 90,000 in dog dollars, which we printed out to keep you within the budget,” Marsh said. “Your goal is to create a dog park within that budget. This is a group effort. All members of the team will be given equal opportunity to provide input.”

He emphasized that residents using the community garden would need access and that workshop participants would need to make that access part of the design.

Marsh said that a good dog park requires sufficient size to avoid crowding, drinking water and shade, materials for cleanup after the dogs, two-gate entrances, and separate sections for large and small dogs. He recommended that participants start with the most important features and then build around them.

“As you identify features that will be incorporated into the park, start to set aside the dollars that you are going to set aside for that,” he instructed.

One resident asked whether grants could be included in the plans for amenities, and Marsh recommended staying within the budget for now.

“We can talk about what we’d like in the future, but for purposes of this workshop, we really want to get a concept within budget, and then we can talk about future grants or appropriations,” he said.

Marsh added that eight royal palms are available that could be transplanted from Royal Palm Beach Blvd. at no cost because FPL is requiring the village to move them.