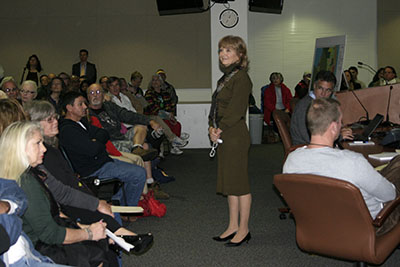 Several hundred people from the western communities, including a number of elected officials, attended a meeting with Palm Beach County planning staff Tuesday regarding the proposed Minto West development and other large-scale projects.

The meeting at the county’s Vista Center office was organized by County Commissioner Paulette Burdick.

Minto Communities Florida recently purchased the 3,900-acre former Callery-Judge Grove property for $51 million. The land, located off Seminole Pratt Whitney Road, has a future land-use approval for up to 2,996 homes and up to 235,000 square feet of non-residential uses.

Minto is requesting the necessary land-use changes for up to 6,500 homes and about 1.4 million square feet of workplace and community-serving commercial uses.

Palm Beach County Principal Planner Bryan Davis, project manager for the Minto West application, explained in detail the county’s planning process, which dates back to 1972. The goal of the idea was to curtail the piecemeal development of projects on an ad hoc basis. It was in response to many large-scale subdivisions that had been done in the preceding decades.

“There was a lot of development out there effectively approved, but there wasn’t necessarily all the corresponding infrastructure,” Davis explained. “A lot of planning is simply timing your impacts of development, accommodating the systematic needs.”

In 1989, the first comprehensive plan was adopted, which has been amended ever since and has elements prescribed by state statute to do regional and local planning to incorporate future needs.

A major revision was made in 1999, when the “managed growth tier system” was instituted. “The comprehensive plan establishes the goal for the county, which is to maintain a high quality of life,” Davis said. “We began to acknowledge different parts of the county that were a little bit different than other parts, and you couldn’t have one set of rules that talked about how things were countywide.”

The tier system attempts to account for more dense urban development on the east coast, acknowledges the Glades development on the lake, addresses a transition to lower densities, and established an urban service area boundary. Outside the boundary, there could be lower density and levels of service, fewer roads, schools and other services.

The 1989 plan also established a study area encompassing a swath of the county extending from Jupiter Farms and Palomar down through The Acreage and Loxahatchee Groves and what is now western Wellington and the Agricultural Reserve, where a different set of circumstances exist.

“It was the first real systematic study of those areas in a planning sense,” he said. “We understood that there was something more unique about those areas that warranted further study.”

In response, communities such as Loxahatchee Groves, The Acreage and Jupiter Farms developed neighborhood plans that recognize the uniqueness of their respective areas.

The county established five different tiers with characteristics specific to those areas. The urban suburban tier is where 90 percent of the county’s population lives, has a full complement of urban services and is intended to be where most development is to occur. The exurban and rural tiers have much lower densities and unique characteristics that the county needs to take into consideration, Davis said.

The Sector Plan was introduced in 1999, using state comprehensive planning laws in an attempt to allow innovative development strategies while respecting unique characteristics of the areas, and addressing impacts holistically before development occurred.

The Sector Plan boundary adopted in 2005 encompassed virtually all of The Acreage, and what was later incorporated as Loxahatchee Groves. Callery-Judge Grove was in the middle of it, as well as the GL Homes land and Palm Beach Aggregates to the west.

“It was a very wide-ranging area that was looked at, and it was identified with a number of strategies to look at those large parcels and how they developed relative to the existing residential neighborhoods,” Davis said.

However, the state found the Sector Plan did not comply with statutes. The county continued to look at revising the Sector Plan, but it was ultimately repealed in 2007 in order to avoid a lawsuit.

In its place, the Palm Beach County Commission directed staff in 2008 to look at an overlay that employed many of the concepts of the Sector Plan but did not guarantee any particular development outcome. That concept was also dropped in light of many of the developments already having approval and the lack of development pressure due to the economic downturn.

“The idea was that the looming pressures of 2005 and 2006 were no longer there, and the effort was discontinued,” Davis said. “That was the end of the Sector Plan.”

Meanwhile, Callery-Judge Grove put forward its 10,000-home Development of Regional Impact in 2007. “That was considered to be a new town, and the county commission in the end denied the project,” Davis said. “However, Callery-Judge had a backup plan.”

In 2006, the state legislature approved the Agricultural Enclave Act tailored specifically to Callery-Judge, which said agricultural areas are entitled to densities similar to those around them.

“That was the backup plan,” Davis said. “The following year, the owner applied for and received an approval from the county commission under the Agricultural Enclave Act, and that’s where the parcel exists today.”

Under the Agricultural Enclave Act, Callery-Judge has a future land-use approval for up to 2,996 homes and up to 235,000 square feet of non-residential uses.

“It’s a provision where these can come in and they get a different review process from any other comprehensive plan amendment to effectively secure the right to develop,” Davis said.

The Agricultural Enclave Act provides development avenues different from any other in the planning process. The application must be transferred to the state regardless of whether the local government approves it. “There is nothing else quite like that in the planning world,” he said.

However, the Minto proposal adds density well beyond the confines of the Agricultural Enclave Act. Davis said the county has received the request from Minto for a density increase, and county staff will spend the next several months negotiating the application.

“Once we have a better understanding, we will bring it forward to the Palm Beach County Planning Commission in February,” he said. “That will be the first discussion in an official capacity.”

In March, it will go to the county commission for the first time. “That will be the board’s first chance to offer real feedback on the proposal,” Davis said. “There will be public information meetings probably larger than this one sometime in mid-April, and in early May, we will bring it back to the planning commission for their formal recommendation.”

It will go back to the county commission in late May for an initial public hearing. “This is the one that automatically has to go to the state for review,” he said.

The final hearing, and approval or denial by the county commission, is scheduled for August.

“This is still very early,” Davis said, adding that the best way to track the project is on the county’s web site at www.pbcgov.com/pzb/minto.htm. “We will update this methodically as we have more information.”

Former Indian Trail Improvement District Supervisor Mike Erickson asked about Minto using a 5-mile radius to find examples of surrounding development, which would include not only The Acreage and Loxahatchee Groves, but portions of Royal Palm Beach, too. Palm Beach County Assistant Attorney Bob Banks said the statute is not clear on that.

James Woods, who grew up in Palm Beach County and lives a half-mile east of the Minto property, and said his and many neighbors’ primary concern is the density.

“I think Minto’s a quality builder,” Woods said. “I’m OK with the currently approved approximately 3,000 homes. I’m not OK with taking that any further. That was a recent increase. With the density comes the traffic and all the other problems.”