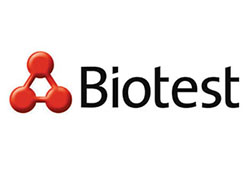 The building, which was previously shared by Capital Lighting and Zoo Health Club, is at the northwest corner of Business Parkway and State Road 7. The company, which collects and processes blood plasma products, will be taking over the entire building.

Erwin said the company is seeking approval for its red signs and a registered trademark, to replace Capital Lighting’s blue signs.

Biotest Plasma Center agent Jack Glover, with Signsations, said Zoo Health Club’s sign will also be taken down, since the fitness facility has applied for a new location on State Road 7.

“The colors are very attractive. I have no problem with the colors,” Becher said. “The signs are very nice, and especially since it’s a freestanding building and on Business Parkway, which does not have any requirements for signage.”

Becher asked whether the applicant would install some landscaping around the monument sign, but said he wasn’t proposing it as a condition for approval.

“I’m not talking about a lot of stuff, just to make it look nice since it’s right on State Road 7,” he said. “It’s nice to have another business that’s not specifically dependent upon the residents of this village. I welcome you.”

“We collect plasma that goes into further manufacturing of other injectable products, like liver transplants to prevent the liver from getting reinfected,” he said. “We do have a lot of these products out on the market. We are based out of Germany.”

Kaboudan said the Royal Palm Beach location will be primarily for the collection of plasma, and that the company’s manufacturing plants are in Boca Raton and Germany.

Larson asked whether the use is acceptable for that area, and Erwin confirmed that it is.

Kaboudan said the center anticipates about 300 donations a day.

“It’s a fully automated process where it separates the plasma, which is the water portion, and the red cells are returned back to the donor,” he said, explaining that the donors are in and out in about 90 minutes.

Larson said 300 trips per day would probably be a substantial increase, but Erwin said the applicant was only asking for sign approval, and that, besides the signs, the new tenant was doing just interior redesign, with no additional approval required.

“Fortunately, they’re right there at the end, which is good, because that poor road has quite a bit of traffic as it is,” Larson said.

Becher made a motion to approve the application, which carried 5-0.

In other business, the commission approved an application by the Enclave multifamily residential development to modify its existing monument sign after it was discovered that part of the sign was within a Wellington easement.

Erwin said the applicant plans to move a portion of the entry sign about 20 feet so it will not encroach into Wellington.

“It wasn’t caught initially when they proposed the sign,” Erwin said. “Wellington discovered it after the fact, and the only way to remedy the situation was to move the sign.”

Jan Polson with Cotleur & Hearing, representing the Enclave, said the sign had been built and was ready for final approval by the building department.

“The Village of Wellington piped up and said, ‘Hey, we have an easement there,’” Polson said. “It has been demolished, except for the tower feature, and the architect went in and redesigned it. We wouldn’t be before you today if that had not happened. It has been sitting out there demolished with the tower, waiting for this hearing to come along so it can get approval and revise the building permit and rebuild it.”

Commissioner Joseph Boyle said the confusion was unfortunate. “I wish the Village of Wellington had made their objection known a lot sooner, and we wouldn’t have had to go through this,” he said.

Polson said Wellington only discovered it when workers visited there.

“I don’t know that anybody knew it was there,” she said. “They may have even been surprised by it.”