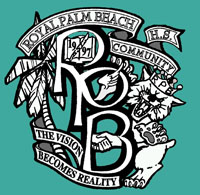 Johnson is working on a project called Helping Hands for the Florida Association of Student Councils (FASC), coordinating with the Florida Coalition for the Homeless.

“It focuses mainly on helping the homeless in any way possible,” Johnson explained. “Royal Palm Beach High School chose this project because we didn’t want to just focus on one organization or one specific task. We wanted to focus on something that we would have many different ways to help.”

Johnson said that more than 640,000 people in the United States are homeless. Of those, there are roughly 240,000 family members and 400,000 individuals. Almost 16 percent are considered chronically homeless — those who experience long-term or repeated occasions of homelessness.

“About 13 percent of homeless adults — that’s 63,000 people — are veterans,” Johnson said. “They are people who went to war and risked their lives for our country. They should be the last ones who are homeless. Some kid who students had never thought of talking to, who they pass in the hallway every day, could be homeless. They are also most likely struggling in school.”

Johnson noted that high school staff has identified 13 homeless students, but there are probably more, because most rarely speak to teachers about it.

He said the best way to help homeless students is to donate money.

Children living in homeless shelters have very few possessions, if any, including toys, Johnson said. “Most families with homeless children — that’s entire families — have very little to no money to spend on essentials such as food and clothes, so you really can’t expect them to spend money on toys to keep children happy and occupied,” he said. “Collecting these items is just as important as donating them.”

Chairman Lynn Balch asked School Board Member Marcia Andrews whether she could comment on the report, and she agreed that there are far too many homeless students in Palm Beach County, although she did not have the exact number.

“We have a homeless coalition team for every area of Palm Beach County,” Andrews said. “What this team does is work closely with schools so that they can identify students who need help, to work with their parents and make sure that there are no additional barriers because they’re homeless.”

She said the district has made a great effort to provide assistance to homeless parents. “We put everything in place to make sure the schools, the parents, the community come together to make sure these students are successful,” Andrews said.

She added that the district also follows through to see that formerly homeless students who are now back in homes, remain in a home. “That help is there until there is no need,” Andrews said. “We want to make sure they have their lunches, their breakfast, their homework, their school supplies, their clothing.”

The program is monitored by staff to see that it’s sufficient to help the student and family recover.

“We have our support team identified just for that,” she said. “We have a director, we have people for this area, right here in District 6. We don’t stop until there is no need to do anything else. And we want you to tell others that if they know of a student who is in need, not to hesitate to call the school district.”

Andrews said most principals are aware of the programs, but that they need families to make a connection.

“If you know someone in need of help, we want to know it. We don’t worry about homework if someone can’t eat,” she said. “We don’t worry about an ‘F’ when someone doesn’t have a place to stay. We come together as a district to embrace the student and the family, to get to a point where they can actually focus on academics. That’s our main goal, but you can’t focus on anything if you don’t have a place to live.”

Andrews said the district coordinates with social services and housing agencies to help families find the services they need.

“We have people ready to navigate the parents and the students,” she said. “That’s why we’ve actually put together a team of employees, as well as social agencies, to help the parents navigate. It takes a while. It’s an ongoing process to make sure that the student is not impacted to the point where he or she cannot be successful.”

Andrews said the FASC project is needed and that she would follow up with Johnson to coordinate with him and his other representatives. “As a district, I think we’re doing well, but we never know how well we’re doing until it goes out to others,” she said, adding that she could invite school district officials involved in homeless programs to a future committee meeting to give a more extensive report.

Vice Mayor Jeff Hmara, the committee’s council liaison, said having the committee pursue student homelessness as an issue might be worthwhile.

“I think it’s surprising and not very well known or very well understood how much of an impact the homelessness situation has on students, and how extensive it is,” Hmara said.

More information about the Florida Coalition for the Homeless can be found at www.fchonline.org.