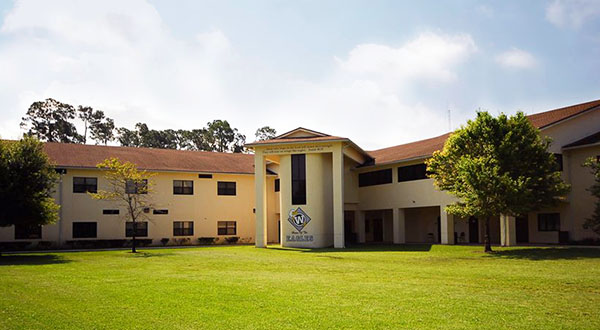 The Wellington Christian School community is asking for help to save its high school after church leaders announced last month that financial strain could cause the school to close grades 9 through 12 at the end of this school year.

But a student- and parent-led effort to save the school has taken shape, and Wellington Christian School will host a fundraiser on Saturday, Jan. 25 at 7 p.m., with music and entertainment featuring The Voice’s Michaela Paige and country singer-songwriter Emily Brooke, along with others to be announced.

“We want to bring people to our campus and show them what a worthy cause this is,” said Lainie Guthrie, a WCS parent and former parent-teacher organization president. “It’s a parent-led effort. We always say that Wellington Christian is the best-kept secret in Wellington, but we don’t want it to be a secret. We want people to know what a great program we have here and what the community could be losing.”

Students, faculty and parents were shocked to receive a notice Dec. 12 from Headmaster Dr. Tim Sansbury that the high school could close.

“I was devastated when I heard the news,” said Bill Mitchell, a 10-year educator at WCS who teaches high school history, government and economics. “It was like I was punched in the gut.”

There is still a glimmer of hope: if the community can raise $1.6 million by the end of January, the high school could remain open.

“We would be happy to have [the high school] continue if the money is raised,” Sansbury told the Town-Crier Wednesday. “Our target is $1.6 million, which represents our cash reserves. We want to make sure we have the ability to meet future needs and also invest in marketing to bring in more students and make the school sustainable.”

Wellington Christian School, located on Wellington Trace, first opened its doors in 1981, offering preschool and kindergarten classes. It later expanded to a full elementary school, with its first class of fifth-graders graduating in 1987.

The school added sixth through eighth grades in 1993, and the high school in 1999, with its first graduating seniors in 2003.

Sansbury said that the recent economic downturn, along with a series of past changes in school leadership, caused enrollment numbers to drop.

“The single biggest issue is that private schools saw a major decline in enrollment during the economic downturn,” he said. “The recovery has been very slow. The school went through an unfortunate period with a shift in leadership. With the recession, it was a tough time to be trying to fix things. We faced some challenges.”

He noted that the school lacked the money to market to new families, and also had to pay the cost of running a high-school program.

“Running a good high-school program is by far the most expensive part of the school,” Sansbury said. “One of the key pieces is our philosophical commitment. We could cut back on some of that, but it would cut so much value out of the school. It wouldn’t be fair to our kids.”

Students, teachers and parents agree that the education students receive at WCS is invaluable.

“We really want our students to become thinkers,” said science teacher Mark Witwer, who has taught at WCS for eight years. “We’re less interested in telling them what they ought to think, and more interested in teaching them how to think.”

Students have a challenging course schedule. Juniors must write a 10- to 12-page research paper and present it in front of faculty members. Each senior must write and defend a thesis — a process usually reserved for graduate schools.

“These must be properly footnoted, and they have to present to us what they have learned,” Witwer said. “By the time our students graduate, they have written two significant papers. That’s the kind of thing we don’t want to lose. We’re asking our kids to do academically what no other school in the region is doing, and they are rising to meet the challenge.”

Sansbury agreed, noting that the school provides a good, Christian education, but does not necessarily require students to hold the same beliefs.

“We focus on producing thoughtful learners,” he said. “Not every student who leaves here agrees with us on our religious background, but we hope to teach them how to thoughtfully disagree and prepare them to be a part of society. We teach them to research, to read and write, along with science and mathematics, to prepare them not only for college, but for life in the real world.”

Alumnus Michael Metzner said WCS is to thank for his academic success in college. He is in his second year of medical school at the University of Central Florida after graduating from WCS in 2008.

“If it wasn’t for WCS, I wouldn’t be here today,” he said. “They really promote critical thinking and observational skills. A couple of weeks after I graduated WCS, I was hired at the Scripps Research Institute, just from the experience I had in high school. I was there four years.”

Metzner recalled the day he learned WCS could close its high school as a “horrible day.”

“It was like a shot to the heart,” he said. “It’s a place we cannot afford to lose.”

Metzner said Wellington could be losing not only a great school, but a close-knit community of teachers, parents and students.

“My WCS teachers are my mentors,” said Metzner, who attended WCS since sixth grade. “I still call them. We have dinner when I’m home. Because it’s such a small school environment, you really get one-on-one help. I think that mentorship is invaluable.”

Senior Justen Hunter experienced the benefits of a close-knit school after coming from a large public high school.

“I was surprised that the teachers were personal and friendly,” Hunter said. “They took the time to relate to me and offer one-on-one help. Even though I’ve only been here two years, I have a lot of school spirit. It truly is one of the best places I’ve been.”

Mitchell, the 10-year teacher, said his WCS colleagues truly love their jobs and their students.

“The teachers are highly relatable,” he said. “It’s just a tremendous school. You can feel the connection here. We’re not here for the money. We’re here for the school and for the kids.”

Hunter said his classmates have been distraught over the news.

“There has been a lot of crying over the subject,” he said. “A lot of these kids have been here their whole lives — preschool through their junior year — and they don’t know what to expect anywhere else. This school has done so much for me in two years, I can’t imagine how the kids who have gone here their whole lives are feeling.”

The entire WCS community has rallied around the cause, seeking donations to support the high school.

“I hope we’re able to band together and raise some funds,” Hunter said. “I hope it does pan out. It would be a disservice to the Wellington community to lose this school.”

Sansbury called the response from the community “humbling.” He said a wave of support has come not only from within the school, but also from alumni and former parents.

“It’s truly humbling,” he said. “It makes it even more devastating to know that it could possibly close. I was humbled to see how many people truly care about the school and desire to see it kept open.”

Guthrie said that although there have been donations and pledges from several sources, the school is still fighting to raise $1.6 million before the deadline.

Sansbury explained that the tight deadline is because most private school enrollment begins at the end of this month.

“People are going to have to make a decision in the next three weeks for their school,” he said. “If we don’t have a clear decision by then, families could miss out on other programs.”

You can donate by visiting www.wellingtonchristian.org and clicking “Support WCS.” Those wishing to make a large donation can contact the school office at (561) 793-1017.

For more information about the fundraiser, or to help, e-mail Guthrie at lainiebrian@yahoo.com.

ABOVE: The Wellington Christian School campus on Wellington Trace. The high school has been operating since 1999.