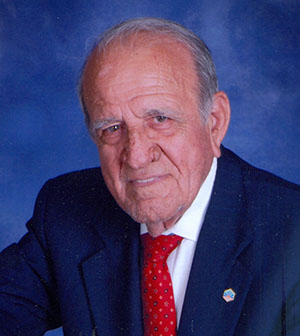 Royal Palm Beach Mayor Matty Mattioli is asking voters to give him one final term in office to send his long political career out on a high note, as several projects he has long worked on will come to fruition over the next two years.

The incumbent mayor faces three challengers in his bid to retain his seat in the Tuesday, March 11 election. He is being challenged by former Councilwoman Martha Webster, community activist Felicia Matula and businesswoman Laurel Bennett.

Mattioli was first elected to the Royal Palm Beach Village Council in 1994. He was elected mayor in 2010 and re-elected two years later. He said he hopes to earn one more term to finish some of the projects started under his governance.

“I’m running for mayor again for my last term,” Mattioli told the Town-Crier. “I hope to finish a few projects I’ve been working on for the last two or three years.”

He said his top accomplishments include keeping a low tax rate and helping to bring the Aldi distribution center to the village. “The first year I was elected, I said I would not raise the tax rate,” he said. “In all those years, we have not raised the tax rate.”

Additionally, Mattioli said that Royal Palm Beach has been diligent with its spending. “That’s why we have the reserves we have,” he noted.

Royal Palm Beach has also seen economic growth despite turbulent economic times. He said one of the reasons why is because he worked closely with the Business Development Board of Palm Beach County to attract employers to the area.

“I worked for years with [BDB CEO] Kelly Smallridge to get Aldi and the General Tire Company to come here,” he said. “It was something I dreamed of.”

When Aldi’s distribution center is completed — which should be next year — Mattioli said it would be an asset to the community.

“They are going to bring 200 to 300 jobs,” he said. “Where are you going to expand and bring in job-producing plants? Royal Palm Beach is 95 percent built out; there’s not a lot more room. [Aldi] is building a 600,000-square-foot building with 100,000 square feet under refrigeration, and we get a utility fee for the refrigeration.”

The planned tire center on Southern Blvd. will add another 50 to 60 jobs, Mattioli said.

“To run those two companies, they’re going to need pencils, papers, trash cans and more,” he said. “Our local businessmen might be able to capture some of that.”

He also hopes the businesses will encourage people to move to Royal Palm Beach and fill vacant homes.

“Do you want to drive an hour or two to work? No. You’re going to want to live a mile or two away,” Mattioli said. “We have homes that are under foreclosure or heavily indebted in liens. This could help bring people to the area. If you get a job with Aldi and don’t want to drive, you might buy in Royal Palm Beach. That will be a boost to the real estate business.”

It is these projects and more that Mattioli said he’d like to see completed before he leaves office. “I want to keep the tax rate low and get Aldi and the tire company done,” he said.

Mattioli would also like to look at plans for other vacant areas in the village. He noted that the southeast corner of Okeechobee Blvd. and State Road 7 is one of the last sites zoned for commercial. “It’s the only large piece of land we have left,” he said.

Regarding the former wastewater treatment plant site that was the subject of much controversy in the last election, Mattioli said that he is satisfied that it is zoned for residential use now, rather than commercial space.

“I said this two years ago. It’s a residential area, and the residents are going to want single-family homes and maybe a park area for the kids,” he said.

With the economy recovering, Mattioli said Royal Palm Beach is in a better financial situation than in years past, though it retains a lean budget.

“Our budget is pretty well cut to the bone already,” he said. “But with the increase in ad valorem taxes, that little bit [of revenue] is a lot to us. The added ad valorem taxes we would get if the market keeps crawling up would cover [budget shortfalls].”

He also noted that Royal Palm Beach has more than $5.5 million in reserve funds that were taken from interest accrued by the sale of the village’s water utility to the county. “If things get bad, we can use that money,” he said. “But just because we have the money doesn’t mean we should spend it.”

Mattioli said that he would like to see more enforcement from the Palm Beach County Sheriff’s Office to help curb traffic problems in the village. “If you put an officer every 10 feet from Southern Blvd. to Okeechobee Blvd. on Royal Palm Beach Blvd., I bet you’d have 10 or 20 citations,” he said. “Word gets around. The frequency of police officers can help deter crime and vandalism.”

He noted that development west of the community could affect traffic in the village. “I’m saying no to Minto West,” Mattioli said. “They have yet to tell me where all this traffic and water is going to go, because it’s not going in my village.”

Mattioli said he would continue to be a voice for extending State Road 7 to Northlake Blvd., noting that the village has already contributed $5,000 for a lobbyist. He said he would vote to spend more on the cause if needed.

“I’m happy to contribute to it,” he said. “Every issue that has been raised [by opponents to the road] has been solved.”

Recently, Royal Palm Beach purchased a home on Heron Parkway to give access to Commons Park by way of foot and bike paths. Mattioli said the paths should go in only if residents of the surrounding neighborhood are on board.

“They’re worried about vehicle traffic and people parking on the street,” he said. “This is not my town alone. If residents want it, they should have it. If they don’t want it, then we shouldn’t put it in.”

But traffic getting out of Commons Park has been an issue, especially during well-attended events. Mattioli said he thinks the addition of other exits could help ease the congestion.

“We’ve suggested putting a driveway on the other side of the Harvin Center for northbound traffic,” he said. “We’re trying to figure out a system to make the traffic move a bit quicker.”

He noted, however, that traffic is largely a problem during the village’s major events, which are often attended by people from outside Royal Palm Beach.

Mattioli agreed that Royal Palm Beach puts a lot of emphasis on its parks. Although the cost of maintenance makes up a large percentage of the budget, he said he did not want to pull money from the reserves to pay for the upkeep.

Regarding the performance of Village Manager Ray Liggins, Mattioli said he believes he is doing well. “He’s an engineer,” Mattioli said. “I sometimes have to tell him he has to quit thinking like an engineer. His job is to prevent problems. But he’s willing to learn, and he knows a lot.”

Though some have cited the mayor’s demeanor on the dais as an issue, he said the complaints stem largely from personal disagreements between parties.

He noted that although some have complained there is not enough opportunity for public comment, he is following the agenda.

“The agenda has a portion called ‘statements from the public,’” Mattioli said. “I always ask if there are any statements anyone wants to make about something that is not on the agenda. I tell them that this is the time to speak.”

Going forward, Mattioli said he envisions Royal Palm Beach staying very much like it is today.

“My vision is to keep it the way it is. It’s a great community, and people love living here,” he said.

Mattioli said voters should vote for him because they can count on him to keep Royal Palm Beach headed in the right direction.

“I have kept taxes low,” he said. “I brought Aldi and the tire company to the village, and I want to see it finished.”