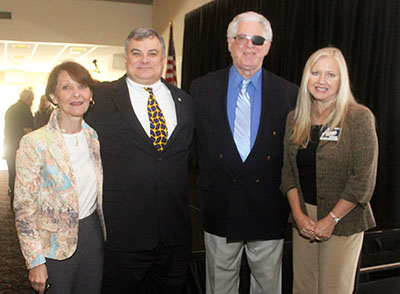 Top topics included plans for the Wellington Community Center reconstruction and the possibility of senior housing. Seat 3 contender Matt Kurit was not in attendance due to scheduling problems.

Each candidate was given time to speak to club members, followed by several minutes for questioning.

She said that during her term on the council, she has voted and fought for several programs to benefit seniors. This includes the Senior Transportation and Rides (STAR) program, which provides taxi vouchers to seniors.

“I think it’s a great program,” Gerwig said. “There was some discussion on the council that if seniors didn’t use their rides up, they shouldn’t get them the next time. I argued against that. If someone requests the [vouchers] and doesn’t use them, that’s fine. It’s a security for them. You don’t have to use them, and you should be able to reload them the next month. It doesn’t cost us if you don’t use them.”

Gerwig also said she has pushed to rebuild the community center, noting that tying the relocation of the tennis center to the project has slowed it down.

“Every time we have voted on the issue, I have voted to take this building down and rebuild an accessible building,” she said. “I said we need to ask our seniors, who are our primary users, what they want for it. It’s long overdue.”

She added that she has been a proponent of leaving the tennis center in its current location because of both cost and time concerns.

Gerwig said she wants to continue to address senior issues, noting that she voted to form the Senior Advisory Committee, which acts as a bridge between the senior community and the council.

“I voted to form that committee because I believe our seniors need a voice in the village,” she said. “The best way to have your concerns addressed is by going through the committee, which can then come to us.”

During questioning, Gerwig was asked about her vision for affordable senior housing in Wellington. She said that while she supports the cause, it is problematic to have government-subsidized housing.

“We can’t say that since you’ve lived in Wellington for 10 years, you qualify to move into Wellington housing,” she said. “We can’t do that by law. A public housing concept can be really detrimental to property values for all of us, and we can’t control who lives there.”

She clarified that she doesn’t think senior housing brings down property values but, rather, that government-subsidized housing can.

Wellington can help seniors to age in place, she said, by encouraging more developers to build senior housing. “If we want more developments like that, we need to tell developers,” Gerwig said.

Lascola, Gerwig’s challenger, bought property in Wellington with her husband in 1980 and spent several years traveling to Wellington before becoming a permanent resident in 1995. She is a retired businesswoman.

Lascola said she decided to run for the council because she wants more opportunities for seniors in Wellington.

“This started because my mother is in the early stages of dementia, and I was looking for an adult daycare center for her,” she said. “As we know, Wellington doesn’t have a facility like that.”

Her vision for Wellington’s future includes a dedicated senior center, ample opportunities for senior housing and a council that listens to the needs of its people instead of “pandering to developers.”

“My vision is for Wellington to have a senior center for our wonderful senior population,” Lascola said. “We have such wonderful people who have lived here for years. Now that we’re at that particular age, we come to our meeting here each month, but what do we do after? We go home.”

She said she wants to see a place where seniors could come to enjoy each other’s company, along with refreshments, activities and other amenities.

Another issue Lascola said she will fight for is affordable senior housing. “You may enjoy having a large house now, but one day you will want to downsize,” Lascola said. “Wellington was never built for our seniors. The Senior Advisory Committee was put together, and they have wonderful ideas, but because of some issues Wellington has had, none of the ideas have been put out for the public.”

Lascola said she would bring attention to issues other than what is brought by developers.

“I was very involved in the golfing community,” she said. “I had friends I played bridge with. I helped my neighbors.”

Asked about senior housing, Lascola said an affordable option was needed. “I have friends who moved away from Wellington because they couldn’t afford to live here anymore,” she said. “There are ways to manage and solve the problems we have.”

Councilman Howard Coates, the Seat 3 incumbent, said he would put his focus on infrastructure, continuing to improve Wellington’s older neighborhoods and attempting to diversify Wellington’s economy.

“We have to make sure we have the funds in place to do capital improvements to prevent the flooding we had during recent storms,” Coates said. “It wasn’t just in the equestrian community, but also flooding on major thoroughfares like Forest Hill.”

He also said he would vote to continue funding the Safe Neighborhoods program, which is helping to revitalize older communities in the village.

“I want to continue the programs we have in place to improve neighborhoods that are 20 to 30 years old and suffering blight,” he said. “If we don’t do that, it will pass through the community and affect the property values of all the properties in Wellington.”

Though plans for a medical arts district on State Road 7 have ground to a halt, Coates said he wants to revisit that idea and other plans to stimulate Wellington’s economy.

“The Wellington economy is very cyclical and very tied to the equestrian industry,” he said. “I think there is the potential of bringing more medical institutions to take root here in Wellington.”

He said he has been a major advocate for seniors and has worked on the council to provide more senior housing opportunities. One of the ways was by voting to allow expanded assisted-living facilities in certain areas of the village.

“It’s a very important aspect because it allows seniors who don’t want to leave Wellington, or children who want to have their parents nearby, to have housing within our neighborhoods,” Coates said. “We expanded it from 14 to 21 residents in the facilities.”

Additionally, Coates said he has been a proponent of rebuilding the tennis facility but voted against moving it. “Let’s focus on the community center,” he said. “My fear is that we are going to have to cut the size of the community center to fit within the budget if we decide to move tennis.”

During questioning, Coates was asked about his decision to vote to remove fluoride from Wellington’s water supply. He said he thought it should be up to individuals whether to ingest it.

“It was clear the reason fluoride is added is for medical reasons,” he said. “My view is we as individuals have the right to make that choice.”
ABOVE: Wellington Seniors Club President Howard Trager with the candidates. (L-R) Sharon Lascola, Councilman Howard Coates, Trager and Councilwoman Anne Gerwig.