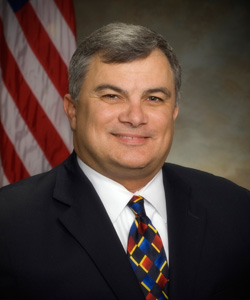 Wellington Vice Mayor Howard Coates believes the village needs his experience as a mediator to help retain stability and consistency on the Wellington Village Council.

Born in Virginia, Coates has lived in Palm Beach County for more than 40 years. He attended local public schools and joined the U.S. Marine Corps out of high school. Promoted to sergeant after two years, he was later accepted into the U.S. Naval Academy.

Following his military service, he entered the University of Florida, where he met his wife of 30 years. Upon graduation, he earned his law degree from Yale University. After briefly practicing law in Atlanta, Coates returned to Florida, where he has practiced law for the past three decades. He is extremely proud that all of his children have graduated from or are now attending college.

Coates started his own law practice in 2003. “That is what led me ultimately to the path of running for the Wellington Village Council,” he recalled. “I wanted to get more involved in the politics of the community.”

After an unsuccessful council bid in 2008, he was appointed to a vacant seat in 2009. He ran for a full term in 2010, claiming the seat unopposed.

“One of the reasons I’m running for re-election is I feel we made such great progress during my first three years of service, but then we’ve taken some steps back in the last two years, and I want to be there to get the ship righted,” Coates said. “I think we’re on the right path, but we still have a ways to go before the community can be fully healed.”

The council has dealt with some difficult issues that divided both the council and the community, Coates said.

He pointed out that the present council initially opposed mediation to work through issues with Mark Bellissimo and Wellington Equestrian Partners. “I kept pushing for that because I thought that we might ultimately stumble on something that would work,” Coates said. “After the mediation, came a new proposal for them to submit their plans in a renewed fashion.”

Coates said the issue has always been expanded equestrian uses around the dressage facility as opposed to expanded commercial development there. He noted that he favored a robust dressage facility to be used for commercial purposes, but did not support a proposed large hotel that would have required a comprehensive plan amendment.

Coates said one of his top accomplishments was to get the council discussing new plans to get the dressage facility back on track. “I do believe I played a key role,” he said. “But sometimes I believe there is too much of a focus on solely the equestrian issues.”

He is also proud of his role in building the new Wellington Municipal Complex and all the nearby amenities, such as the Wellington Amphitheater and Scott’s Place.

Coates believes that he is the best person to serve on the council because he has five years’ experience. “I think I bring a lot of knowledge to the position,” he said. “I play the role of being the mediator, the compromise person to bring it all together.”

He said that he has always tried to find the best middle ground for Wellington. “It’s not necessarily a personal agenda,” Coates said. “I think that the people don’t want to see a council that’s fractured.”

Looking forward, Coates said Wellington needs to resolve its flooding issues. “We’ve had some serious flooding that’s making me question whether the infrastructure is adequate,” he said, adding that he feels South Shore Blvd. needs to be elevated so that it is not so prone to flooding, and pumps must be added so stormwater can be moved faster. “We were very close to there being significant damage to homes in a large swath of Wellington in the last couple of years.”

He also wants to renew emphasis on the Safe Neighborhoods program and keep taxes low.

Coates supports the construction of a new Wellington Community Center, but would like to do so without moving the Wellington Tennis Center. “Certain amenities, like tennis facilities, you want to provide them so that they are equally accessible to all of Wellington,” he said. “It makes sense to me to keep the tennis facilities in a center part of the community.”

He said the recent acquisition of the Lake Wellington Professional Centre at least partially resolves issues that the council faced when it first decided to build a new community center. “One of those issues was parking,” Coates said. “I think with the acquisition of that property, we can take care of the parking issues that we had.”

While the council must deal with a wide range of issues, equestrian issues will remain some of the most important and controversial, Coates said.

“It’s very easy to pay lip service to the equestrian industry, and everybody supports it, but where the difficulty comes in is where actions back up what you’re saying,” he said. “The applicant in some of the equestrian matters gets raked over the coals occasionally when he comes before the council, and I don’t see that kind of treatment for other individuals.”

Overall, Coates said the relationship of the council with Bellissimo and Wellington Equestrian Partners has improved, although there is still a lack of mutual trust. “That has been tough to overcome,” he said.

Coates feels that there is no need for structural reorganization of the current village staff. He continues to support Village Manager Paul Schofield. Although he thinks the village’s upper administration was a bit top-heavy, recent retirements have taken care of that concern.

“Paul has done a very good job navigating the village through very tough economic times,” Coates said, pointing out that they reduced the budget from $120 million to $75 million and reduced the staff from 400 to fewer than 300.

Coates feels the village is moving in a positive direction in rejuvenating troubled neighborhoods, although it has gone slowly and been expensive. He also supports the medical arts district idea, although its concept has been challenged by disparate land owners who don’t seem to be coming together.

“That’s where I understand most of the problem has occurred, is in bringing the private landowners to buy into the concept,” he said. “I really believe that could be a nice economic boost to this community.”

Asked whether he thinks recent allegations brought for consideration to the Palm Beach County Commission on Ethics and the Office of the Inspector General were an abuse of the office, Coates said he fully supports county ethical oversight.

“It serves a very important role because sometimes we are traversing very close ethical lines and we need guidance,” he said. “I have no reservations with their scrutiny.”

Regarding the K-Park land on State Road 7, Coates said he has always regarded it as one of the last vestiges of prime property that can be used for a public purpose, although recent plans for it fell through.

“If the horse park could have been brought to us in a way that made sense and was viable, and we could use the proceeds to support a public purpose, I would have considered that,” Coates said. “However, my first preference is that we find a public purpose for that property that serves all of Wellington.”

Coates recently cast the deciding vote to remove fluoride from Wellington’s municipal water system. Although he agrees fluoridation has medical benefits, he believed that since it’s a medical decision, it’s a personal one.

“It wasn’t whether the scientists are right or wrong,” he said. “Even assuming that they’re right on the medical side of it, I still want a choice whether to accept that or not. For the citizens, if you want fluoride, you can go get fluoride, but you can’t take the fluoride out of the water, so by putting it in, you’ve deprived the citizens of a choice.”

Coates said that the perception that he’s on a slate with Councilwoman Anne Gerwig, also up for re-election, is unfair.

“There have been many times when I have not voted with Anne on key issues,” Coates said. “Lots of times we voted the same, but for very different reasons.”

He said voters should vote for him if they want stability and consistency on the council.