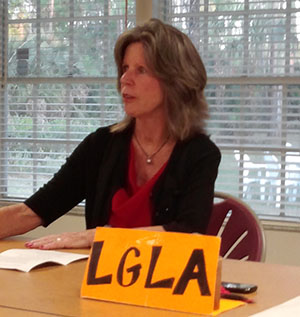 Gannon’s office sent out 687,000 property tax bills this year. “That represents about $3.1 billion in tax revenue,” she said. “Our average residential tax bill in our county is about $4,500.”

Part of her office’s business plan the past three years has been to get people accustomed to paying their taxes online. “That has actually increased about 31 percent,” Gannon said, explaining that online payments mean less work for her office and a gradual reduction in her work force. “If you pay online by e-check, it costs you nothing. You can do credit card, which means there’s fees to pay, but that’s not a fee that we collect. It’s a fee that credit card processors collect.”

She pointed out that unpaid taxes were delinquent as of April 1. “We’re getting ready for our tax certificate sale, which will be in June, to collect the amount [due from] people who did not pay their taxes,” Gannon said. “We sell those taxes to investors, and the person who owns the property has to purchase that back with interest and fees.”

The sale is now an online auction. “You have to register and you have to pay a certain down payment if you want to bid on properties,” she explained, noting that the interest rate starts at 18 percent. “This is the best investment in the marketplace right now.”

After the second year of a tax certificate sale on the same piece of property, that bidder or anyone can apply for a tax deed application, and if the property owner still has not paid after seven years, there is an auction on the property.

“Because you hold the certificate or the tax deed does not mean that you get the property,” Gannon said, explaining that the property owner or someone else can purchase the property at the auction. “Typically, the investment companies do not want the property.”

Gannon said many of the properties with tax certificates on them are also in foreclosure and poorly maintained. “The bank or the mortgage company should be maintaining it, but in most instances, they don’t do that,” she said.

Gannon believes the online system is fairer than when the auctions were on the courthouse steps, because there was opportunity for favoritism by the auctioneer. “We have a company that we contract with that does the online auctions for us,” she said. “We’re like an arm’s length away from it.”

She added that the Tax Collector’s Office is first in line to receive lien payments if the property is foreclosed.

“We are notified through the court system, and we go through our records, and if there are taxes not paid, we file in court,” Gannon said. “We are the first lienholder.”

Gannon’s office makes it as easy as possible for property owners to keep their accounts up to date. For example, the Tax Collector’s Office has an installment plan.

“That means that you can pay your property taxes over a quarterly payment,” she said. “The amount of the discount is a little over 3 percent. Once you get on the installment plan, you continue to do that until you tell us you don’t want to anymore.”

Gannon said that payment plan is more manageable for people such as the elderly or others on fixed incomes. “We talk to a lot of elderly people about doing that,” she said. “It makes it much easier for them to pay their taxes.”

The Tax Collector’s Office took over the issuance of driver’s licenses and renewals several years ago. Last year, the office issued about 171,000 Real ID-compliant licenses. She pointed out that veterans with an honorable discharge can bring their Form DD-214 when they renew their license and have proof of their status printed on their license. “The reason to do that would be there are many stores that give discounts to veterans,” Gannon explained.

The office also issues Real ID-compliant cards for people who do not have driver’s licenses. People with licenses that are not Real ID-compliant must come into an office with proper identification, and after that they can renew online.

Gannon said the state is looking at new technology to issue driver’s licenses. “Potentially, they’re going to change the way your driver’s license looks and make it more secure, but if you’re Real IDed, it’s not going to matter,” she said. “It will be phased in over a period of time. They’re only now starting to look nationwide at other license systems. Our technology hasn’t been changed for more than 10 years. There’s really been no updates, and there’s so much new technology and security precautions that we could take.”

“It’s going to be a 30,000-square-foot building,” she said. “We won’t break ground until August, but we’re in the planning process.”

Last year, the eight offices served about 900,000 clients. “Keep in mind that Palm Beach County only has 1.3 million people,” Gannon said, adding that the call center handled about 200,000 calls.

“We actually collected about $60 million in fees that we get to perform the work that we do,” she said. “Our overhead budget last year was about $23 million, and we returned $37 million to all the people we collect on behalf of.”

The office recently changed its web site at www.pbctax.com based on feedback it has received from the public. Gannon invited community members to visit the web site and check it out.