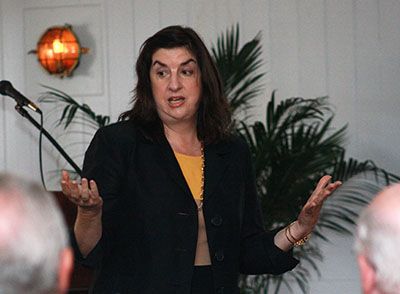 Small business owners should be aware of the risks of operating a business in the age of the Internet. That was the message keynote speaker Sharon Geltner conveyed to members of the Wellington Chamber of Commerce at the chamber’s monthly luncheon Wednesday, April 30 at the Wanderers Club.

Geltner is a certified business analyst for the Small Business Development Center at Palm Beach State College, where she also teaches Internet marketing.

Speaking about “All Things Scary on the Internet,” Geltner said that there are tools and information that small business owners should know to protect their businesses and their reputations.

“About a year after I opened, I was Googling myself… and found that 15 guys in New York were calling themselves Froogal Media Group,” she said. “Their web site resembled mine, and they offered the exact same services. They probably went to my web site and could tell it was a one-woman shop, and probably figured I didn’t have tens of thousands of dollars or the time to spend on litigation.”

But because she had her company registered with the U.S. Patent & Trademark Office, she was able to stop them from using her name.

Only YouTube and Twitter didn’t agree to take the company down, citing the fact that the sites allow for parody and satire.

Protecting your business’ trademark is important to keep customers from becoming confused, as well as to prevent impersonation.

“You have a lot of rights, but people don’t know,” she said. “And customer service [on social media sites] is so limited.”

There are some advantages to registering a trademark other than protecting your business, Geltner said. Being on a federal registry means your business is more likely to show up on search engines, and other publications that report on trademarks will include your business, also pushing it up the ranks.

Another major issue for businesses is controlling comments, especially on social media and review sites like Yelp.com.

“With the anonymity of the Internet, there’s the temptation to write mean things,” she warned. “But you’re not without your defenses.”

There are companies who help manage online reputation, keeping false information off the Internet, Geltner said. Often sites will aggregate public information about people, much of it false or misleading.

“This is tied in to your personal reputation, which affects your business reputation,” she said. “Some of these sites will imply the person you’re searching for has been arrested, or other false information. A lot of this stuff is nefarious.”

She suggested a site like www.reputation.com, which can help battle the misleading information by getting it off the Internet.

Business owners should also subscribe to Google Alerts, a service that sends an e-mail every time a keyword appears in the news. By signing up with a business name or personal name, businesses can keep on top of what people are saying about them, Geltner said.

A larger problem is review sites, which allow for anonymous comments without verifying information. Many of the chamber members cited concerns about the sites, which are often used maliciously.

“It’s so much easier to destroy than to create,” Geltner said. “There are people out there who might be looking to harm your business. Some of them just have a screw loose. The problem with the Internet is it gives these people a voice. That’s good for democracy, and it’s good that small businesses can promote themselves almost for free, but the bad part is you have to deal with [people being malicious].”

Geltner said there is a lawsuit currently in court regarding a Yelp.com review of a carpet company, where a competitor flooded the site with bad reviews, costing the company revenue.

“Their sales dropped 33 percent in three months and stayed that way,” she said. “They’re not monitoring those comments. This is in court.”

Though someone with bad reviews might be tempted to counter with good reviews, Geltner said many sites will flag what they perceive as false positive reviews.

“They will call it irrelevant information and put it in another part of the site,” she said. “They see that the response came too quickly and know it must be a friend.”

There are ways to get comments taken down, Geltner said, but it’s often very difficult.

Ultimately, Geltner said business owners should remain aware of what is being written about them, both by customers, competitors and employees. She suggested having a social media policy for employees.

She also suggested business owners protect their computers and web sites from viruses and hacking, either by hiring an in-house IT person or subscribing to a service that will do the work.