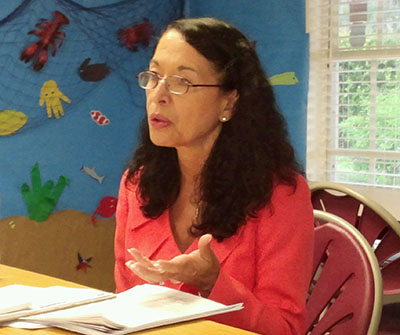 “We’re gearing up for the election cycle,” Bucher said. “We are setting up right now to provide for early voting.”

Early primary election voting will start Monday, Aug. 11, and end Sunday, Aug. 24, two days before the primary election. The 14 early voting sites include the branch libraries in Wellington and The Acreage. The hours will be 10 a.m. to 6 p.m. daily.

“I’m pleased to say that we lobbied the legislature after their changes in laws in 2011, and they actually gave us a minimum requirement of eight days of early voting, but at the discretion of the supervisor, we can actually put back the entire 14 days, including the final Sunday that they took away from us,” she said. “This is very important in minority communities for a program called Souls to the Polls. We did use that discretion, and we will be open every single day.”

The office is also testing several changes that Bucher said will reduce expenses and improve control of the process.

The office also increased the number of printers from 33 to 59.

Bucher said these changes should speed up the voting process and help alleviate long lines.

“The legislature got some bad national press [after the 2012 election], so they listened to us, and they changed the laws that I personally have been trying to change for more than 10 years, dating back to when I was in the legislature,” she said.

“In the past, we could go to libraries, city halls and our offices only,” Bucher said. “They took the language that I recommended and allowed for stadiums, fairgrounds, convention centers, community centers and senior centers that are owned by a public entity.”

Bucher was able to get the Palm Beach County Convention Center in time for early voting in the primaries, and the South Florida Fairgrounds will take part in general election early voting, which will start Oct. 20 and end Nov. 4.

The office has also enabled voters to use iPads to check on their registration status.

“We worked with some vendors and helped them create a program that actually will check our voters in,” Bucher said. “It takes about a minute, and it takes a picture of the back code on your driver’s license or Florida ID and automatically populates the information… You turn it over and sign it like a credit card, and it will automatically send a message back to our main database that will record your voter history. That will happen in early voting, and it will happen at the polling location.”

The new electronic devices provide not only for a quicker, easier function for the voter, it will also provide the office with a lot of data. “We will be able to pick up and tell you what the voter turnout is at every precinct,” she said. “We intend to probably post that on our web site, and we will probably post that about three times a day on Election Day.”

Bucher said the innovation is significant because it eliminates the need for the office to print out voter status for individual polling places the night before the election.

“We are the first supervisor in Florida to use off-the-shelf iPad Minis,” she said. “We helped create the program, so the program is customized to Palm Beach County. There’s a couple of supervisors behind us; they want us to use it first.”

Bucher said the new programs have been tested several times, including computer restarts and in small elections.

“We’re entering into new technology,” she said. “I’m sure we’ll get a black eye somehow, but I’m really excited about it. I’m very pleased, and I’m very proud of the team that we have.”

Bucher noted that her office operates with a small staff of 38, which she hopes to increase to 40 in the coming year.

“We have a crew of people that we have had for a very long time,” Bucher said. “There are three individuals who are my key managers. Collectively, they have 86 years of experience, and as they work toward their retirements, we are working hard to bring people to start working under them so they can gain the same kind of historical knowledge and background.”